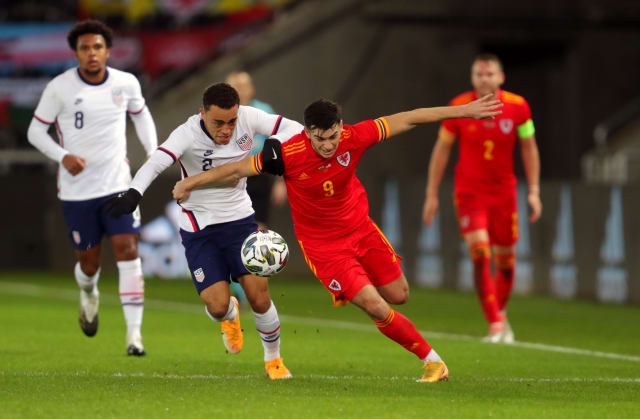 Page is in temporary charge of the Dragons following Giggs’ arrest over an alleged row with girlfriend Kate Greville at his Manchester home on November 1.

Giggs, who has denied the allegation of assault made against him, was not present at the Liberty Stadium on Thursday and will miss the upcoming Nations League games against the Republic of Ireland and Finland.

But Giggs was in contact with the Wales camp before the USA draw and Page said: “We spoke before the game and he wished us all luck.

“We spoke about substitutions and how we anticipated the game would go.

“We’ll also have a debrief tonight and we’ll go through any little knocks we’ve picked up, performance, areas we need to look at and have a quick chat.”

Wales rested captain Gareth Bale for the Swansea friendly and the Tottenham forward was spotted by television cameras looking at a MacBook during the match.

Viewers joked that Bale, an ardent golf fan who was known as ‘The Golfer’ by his former Real Madrid team-mates, was watching the Masters in Augusta.

“I don’t know what the players not in the squad were up to,” Page said when asked about Bale.

“There are no problems at all. Balo’s here, he’s in the dressing room with the lads beforehand and making sure that everyone’s in the right frame of mind.

“He is probably the fittest he has been. He has worked week in week out and we will benefit from that.

“It was always the plan to leave him out of the 23 and have him raring to go and firing on Sunday.

“I thought there were a lot of positives from the game, regards to keeping clean sheets and confidence we’ve kept our momentum going.”

USA players and staff took a stand against racism before kick-off with ‘End Police Brutality’, ‘Be Anti-Racist’ and ‘World Peace’ just some of the slogans emblazoned on the back of their training tops.

It was America’s first game since the death of George Floyd, a black man from Minneapolis, at the hands of police officers in May.

Head coach Gregg Berhalter said: “I’m proud of how the players came together and thought long and hard about how they would stand up to social injustice.

“They came up with ‘Be the change’. The guys really take this seriously and want the individual to take responsibility for making the change in society. It’s a great message.”

On the game, he added: “I saw some attacks going forward, but not nearly enough. We’re still learning the principles and how we want to hurt the opponents and take advantage of their weaknesses.”