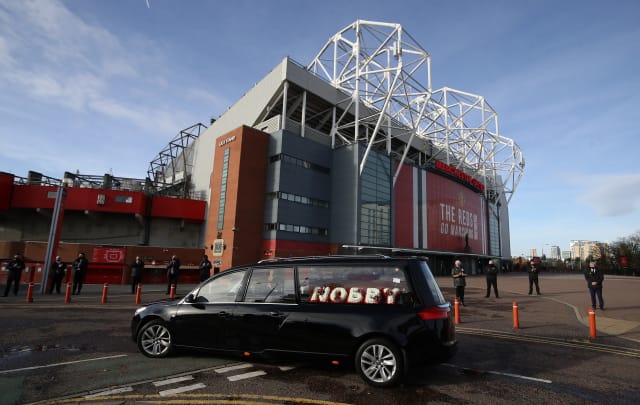 Football paid tribute to Nobby Stiles ahead of the funeral of the 1966 World Cup winner in Manchester on Thursday.

Stiles died on October 30 at the age of 78 following a long illness.

As well as his success with England, former midfielder Stiles was also part of the Manchester United side which became the first English club to win the European Cup in 1968.

Stiles’ funeral is scheduled to take place at Manchester Crematorium Southern Cemetery on Thursday afternoon, the hearse going past Old Trafford en route from the family home in Salford.

There is also expected to be a tribute to Stiles at Wembley ahead of England’s friendly against the Republic of Ireland on Thursday night.

Former midfielder Stiles, who had 28 international caps, also won league titles with United in 1965 and 1967, before leaving Old Trafford in 1971.

Stiles went on to play for Middlesbrough and Preston. He later managed the Lilywhites between 1977 and 1981, was coach at Canadian side Vancouver Whitecaps and then West Brom between 1985 and 1986.

He returned to United as a youth team coach under Sir Alex Ferguson in 1989 for a four-year stint, working with the famed ‘Class of 92’.

Later in life, Stiles suffered a series of health issues, including a dementia diagnosis.

In 2010, after a mini-stroke, Stiles decided to sell his medals in order to leave something to his family.

United bought them for £200,000 and the medals are now housed in the club’s museum.