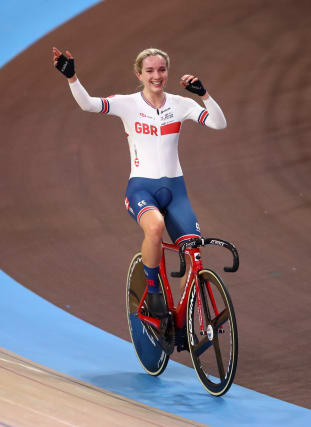 Great Britain claimed two more gold medals on the second day of the European Track Cycling Championships in Bulgaria, with victory in the women’s team pursuit and for Elinor Barker in the elimination race.

Barker, who rode in the qualifying and first-round events, joined them on the podium for her second visit of the evening. Her earlier success made it an elimination race double for GB after Matt Walls won the men’s event on Wednesday.

Kenny said of the team pursuit win: “That’s the fastest time we’ve done since Rio, so that shows the form that we were in going into an Olympic year.

“It’s good to know we are still moving forward, Josie is here for her first European competition and that shows the way British Cycling moves forward too.

“I personally think we’ve got a lot more to come, we’ve got people sat at home itching to get into this team and that can only help us move forward.”

Barker said of her elimination race result: “I’m really happy with it. It went how I hoped it to.

“I rode it how I talked it through with my roommate Laura Kenny earlier today…and yeah, it worked!”

Sophie Capewell and Katy Marchant exited the women’s sprint event after the quarter-finals.