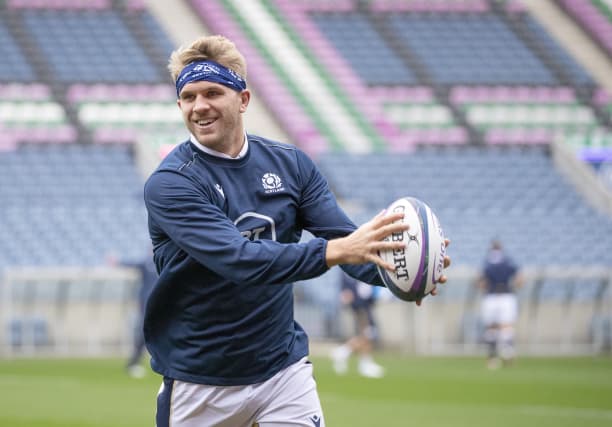 Chris Harris has warned his Scotland team-mates that his Gloucester colleague Jake Polledri is an “absolute freak” on the rugby pitch.

The Gloucester pair will go head to head when Scotland take on Italy in Florence in their opening Autumn Nations Cup tie on Saturday.

Polledri has earned a reputation as one of the best ball-carriers in the game and Harris admits he has marvelled at his team-mate’s ability to ride tackles.

Harris told the Scottish Rugby Podcast: “They have some quality individuals. My mate Jake from Gloucester, he is dense and powerful.

“I thought he must be a unit and I went to the gym and watched him in the gym and I honestly thought: ‘Whit? I am lifting more than this geezer, why aren’t I bumping everyone?’

“He is just one of them who is just a freak on the pitch, an absolute freak.

“But they are a good outfit and they can score from every sort of turnover as well, they are very lively. So from a defence perspective we have got to be on it and I think our attack will look after itself.”

Scotland won 17-0 in Rome during the first part of the Guinness Six Nations but Harris feels Italy have changed tact in recent games.

“They seem to have kicked it a lot more in the last two games so we just need to be aware of that,” the centre said. “They will still have a go and fling it around and they like to offload and keep that ball moving. But we need to be aware that they will kick it a lot.

“But we have back-three boys that will mop that up and have a field day.

“They seemed to be pretty aggressive as well in defence, they seem to coming up a little bit harder. So that will be a challenge as well.

“I think we have to tighten up our attack a little bit and just go at them, almost fight fire with fire, run hard into the spaces that they are leaving, and short passes will move that point of contact. We will definitely break them down.”

Scotland go into the game looking for a fifth consecutive victory and Harris gave an insight into the confidence in the camp even before securing their first win in Wales for 18 years.

“That was special,” the 29-year-old said. “The thing is, in the game, I never felt we were going to lose.

“It was weird. Even when we were down by a point I never felt like we were going to lose.

“The boys’ confidence was up. Maybe it wasn’t the flashiest of games but we did what we needed to do.”