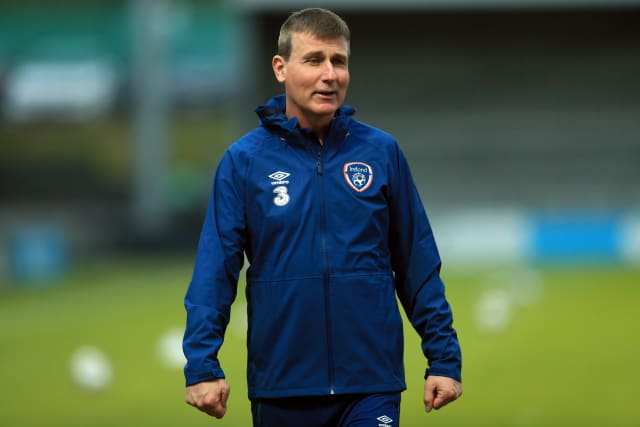 Stephen Kenny insists he does not feel cursed after coronavirus and injury once again robbed him of key players on the eve of the Republic of Ireland’s friendly against England.

Kenny, who lost strikers Aaron Connolly and Adam Idah hours before last month’s Euro 2020 play-off semi-final in Slovakia through Covid-19 protocols, will be unable to call upon West Brom frontman Callum Robinson this time around after he tested positive.

With 20-year-old Brighton forward Connolly’s disappointment having been compounded by a minor hamstring strain picked up in training on Tuesday, the Ireland manager will head into Thursday night’s game at Wembley and the Nations League fixtures against Wales and Bulgaria without two men who could have played significant roles over the next week.

However, asked if he felt cursed, Kenny said: “No, absolutely not. This is the way of the world at the moment.

“People are talking about a vaccine being imminent and 90 per cent proof, all those sorts of headlines there have been recent days, so hopefully this situation is temporary throughout the world.

“In Callum’s case, he came in and on the first test he’s tested positive. He wasn’t feeling unwell, so it’s just unfortunate for him, really. It is the case that we’re disappointed, but you’ve got to deal with whatever comes your way.”

Kenny has sympathy for both Robinson, who missed October’s Nations League encounters with Wales and Finland as a close contact of another member of the camp who tested positive after returning from Slovakia, and Connolly.

His injury, which is likely to sideline him for around 10 days, comes hot on the heels of his exclusion in Bratislava over what ultimately proved to be a false positive test result for a member of staff to whom, the rules dictated, he had been sitting too close on the flight out of Dublin.

Kenny said: “It is very frustrating. Aaron will be a terrific player for Ireland.

“The frustrating part of Aaron’s injury is he will only be ruled out for 10 days. It just happens we have three games in that period.”

It is more than 32 years since Ireland last beat England courtesy of Ray Houghton’s Euro ’88 winner in Stuttgart – Darren Randolph is the only member of the current squad who was alive at the time – although the last five encounters have ended all square.

If pride is at stake in a fixture which excites Irish passions in particular, Kenny, who is yet to win in five matches at the helm, is taking a long-term view as he attempts to mould his squad.

He said: “The bigger picture has always been the World Cup qualifiers. But Ireland have never won in Wembley. We’ve won twice against England, once in Stuttgart and once in Goodison [Park] 70-odd years ago, so it has been a long time.

“England are in good form and we have played well at times, against Slovakia particularly, so we are looking forward to going there and we want to perform well. The players are very committed.”