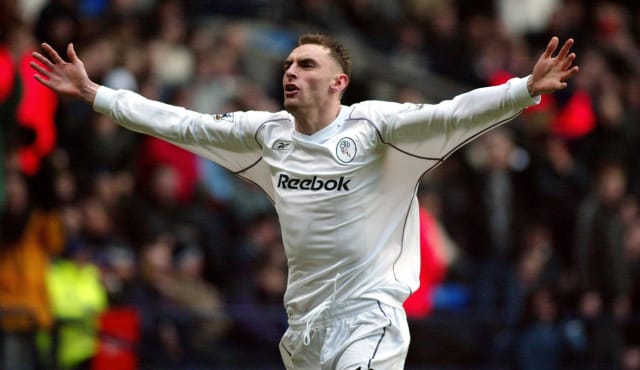 Former Bolton defender Nicky Hunt was taken to hospital with a serious head injury as Darlington’s game with Boston was abandoned on Tuesday night.

The 37-year-old was knocked unconscious following a collision with an opposition player in the build-up to Boston’s second goal in the 87th minute of the National League North match.

He was taken to hospital by ambulance at around 11pm after being treated on the pitch for more than an hour by club physios and medical staff.

Darlington later issued a statement, which said: “We would like to update you on the serious injury to Darlington defender Nicky Hunt.

“Following an incident on the field near the end of the match, Nicky was left unconscious and needed lengthy treatment for a head injury from the physios of both clubs and medical staff. He was taken to hospital at 11pm by ambulance.

“We would like to thank the excellent care and prompt action which was taken by the physios of both clubs, and the Darlington FC safety staff and stewards.

“Our thoughts are with Nicky and his family. We will update everybody when we can.”

The game was abandoned by referee Adam Williamson with the score at 2-0, and the league will have to decide whether the result stands or a replay is required.

However, the scoreline was of secondary importance to those involved at Blackwell Meadows.

Hunt’s former Bolton team-mate Kevin Davies has since tweeted: “Hoping for some positive news regarding my good mate Nicky Hunt in the morning.”

Other EFL and non-League clubs have also posted messages of support for the veteran defender.

Hunt played for Bolton in the Premier League for nine years between 2001 and 2010 during a highly successful period for the Trotters, primarily under Sam Allardyce.

He has since played for several EFL clubs, including Bristol City, Accrington, Mansfield, Leyton Orient and Crewe, before signing for Darlington in the summer.