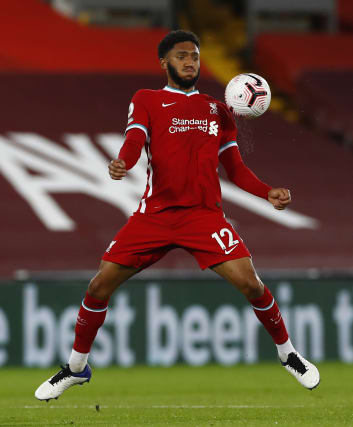 News of a knee injury to Joe Gomez while on England duty has left Liverpool manager Jurgen Klopp with even more limited options at centre-back.

Already without Virgil Van Dijk for most of the season after anterior cruciate ligament surgery, the loss of Gomez again is set to leave him with just one senior central defender in Joel Matip.

Matip has had injury problems of his own, having played only three times this season and only just returning from a five-match absence on Sunday against Manchester City, and it is generally accepted he cannot play three matches a week.

With the transfer window not open for another eight weeks, Klopp has already been forced to utilise the players he has at his disposal within his extended squad, having gambled on allowing Dejan Lovren to join Zenit St Petersburg in the summer.

Here, the PA news agency looks at what options he has.

Klopp was happy to begin the defence of Liverpool’s Premier League title with just three centre-backs, with the back-up plan being to drop midfielder Fabinho into defence.

That was tested sooner than expected when he had to field the Brazil international in the 2-0 win at Chelsea in their second match of the season, with Fabinho excelling in that game.

Fabinho also put in a man-of-the-match display in their Champions League win over Ajax but injured a hamstring a week later and has been out since, although he is expected to return after the international break.

However, with Trent Alexander-Arnold’s calf problem potentially ruling him out for four weeks, Fabinho was also possibly being earmarked for a run at right-back, where he played previously for Monaco and Brazil.

Youngster Nat Phillips and Rhys Williams, both rookies in respect of their playing experience with Liverpool, have been interchangeable since the loss of Van Dijk and Fabinho and both have impressed.

Phillips, 23, can only play domestically as he was not registered for Europe as a potential transfer was in the offing but stood out on his Premier League debut against West Ham a couple of weeks ago.

Williams, at 19, has featured five times this season and has conceded in only one match – the 7-2 Carabao Cup win at Lincoln – and had not looked troubled making his debut in the Champions League just a year after taking the field on loan for Kidderminster.

Klopp has also played his go-to utility man Georginio Wijnaldum in the back four, although not for any high-profile games.

Waiting in the wings

He was named in the Community Shield squad but did not get on at Wembley and then injury robbed him of the chance to feature in the Carabao Cup prior to Liverpool’s exit.

Koumetio has yet to make an appearance in the squad since, although he has been gaining match fitness for the under-23s.

The 18-year-old Sepp Van Den Berg has made four senior cup appearances already but does not look ready for first-team football.

Klopp is not one to rush into the transfer market to immediately solve a problem, preferring to take a longer-term view like he did when they initially failed to sign Van Dijk from Southampton. Instead of going to his second choice, Klopp held out for the Dutchman and was rewarded six months later.

That long-term plan would have been in place to potentially sign a new centre-back next summer, having spent money reinforcing his attack and midfield with Diogo Jota and Thiago Alcantara.

RB Leipzig’s 21-year-old defender Dayot Upamecano – who reportedly has a £40million release clause active next summer – is a player who has already attracted the attention of many of Europe’s top clubs and would undoubtedly be on Liverpool’s radar.

Brighton’s Ben White, 23, was on the list just a few months ago but not considered a priority, while bringing Wolves captain Conor Coady, newly established with England, back to the club was a recent suggestion from former Reds defender Jamie Carragher after it was revealed Van Dijk would be out for some time.