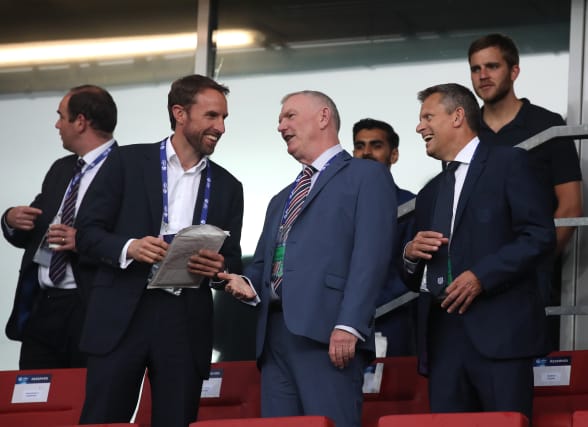 Gareth Southgate has condemned former Football Association chairman Greg Clarke’s unacceptable comments and believes “there was no alternative but for him to go”.

The governing body was sent into a tailspin on Tuesday when the 63-year-old used the word “coloured” among a series of offensive remarks when speaking to MPs on the Digital, Culture, Media and Sport committee.

Clarke resigned that evening and England manager Southgate says that was the only option for him to take.

“Well, I think, as he said himself, the terminology he used in a number of areas was not acceptable and doesn’t reflect the view of the FA, doesn’t reflect what we as a team stand for,” Southgate said.

“I don’t think he had any alternative but to take the decision he did to resign.

“I have to caveat that a little bit. I think (with) Greg, what’s a shame for him in particular is that he’s done a lot of work behind the scenes to support the diversity code, to make a lot of inroads into relationships around Europe.

“When we had the incidents in Montenegro and Bulgaria, he was at the forefront of supporting the players and lobbying with UEFA for change.

“Unfortunately, of course, he’s going to be remembered for the comments he’s made.

“There is a balance to that because I don’t like to see individuals suffer as publicly as he has but, I repeat, what he said wasn’t acceptable and there was no alternative but for him to go.”

The FA is hoping to appoint a new chairman by the end of March 2021 and Southgate wants the right person for the job.

Paul Elliott, the chairman of the FA’s inclusion advisory board, has been reported as a contender, and Southgate was glowing in his praise for the former Chelsea and Celtic defender.

“I must say that there are often a lot of names put forward and it’s easy in the background to have opinions on things without having any responsibility.

“What I admire about somebody like Paul Elliott is that he’s committed himself to football administration.

“I don’t know if Paul’s the right person for the main role. That’s not a decision for me.

“It’s an enormous responsibility and it will lead to a lot of criticism a lot of the time, so it’s got to be a very particular type of person.”

Clarke’s resignation comes just a fortnight after the FA launched its diversity code, which aims to ensure more candidates from ethnic minorities can land top jobs.

Southgate had spoken with his players about the new code on Monday and got them together again following the ex-FA chairman’s comments.

“We had spoken positively about that the day before and I then felt it was necessary to explain that what had happened yesterday wasn’t acceptable and didn’t represent what we stand for as a team and isn’t a fair reflection of the FA,” he said.

“People have a view of the FA and those of you who I know have a bit more insight into over 800 people that work at the FA, across that spectrum, there are people from numerous national backgrounds, from different sexuality, members of the lesbian and gay community.

“It’s as diverse an organisation as I’ve ever been a part of.

“Internally there was a lot of upset about what had been said. I think Greg recognised that amongst all the other challenges that what he said would have provided the upset internally was massive.

“I know there’s a view of what the forward face of the FA is. But there are 800 people here. It’s a far broader organisation than that.”

Former England women’s team coach and captain Casey Stoney was also angered by Clarke’s comments, which saw him insinuate that being gay was a “life choice” and discuss how the lack of women’s goalkeepers was due to girls not liking the ball being kicked at them.

“I think it just shows how much work we have still got to do,” the Manchester United Women head coach said.

“They are completely unacceptable and it was the right thing to stand down.

“There is some great work going on and I don’t think we can go away from that because it is two separate issues, but it shows there is still a lot of education and work to do.”