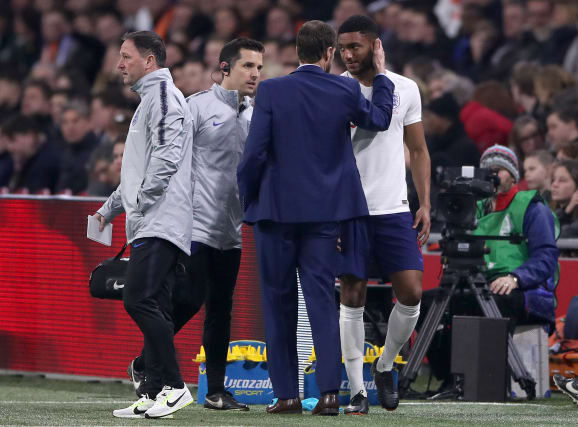 Gareth Southgate is hoping Joe Gomez has avoided a serious knee injury after the “upsetting” sight of the Liverpool defender collapsing in pain during England training.

The 23-year-old had been due to play a key role in this month’s triple-header, only to pull up in alarming fashion on the eve of Thursday’s friendly with the Republic of Ireland.

The Football Association confirmed Gomez has “withdrawn from the England squad having sustained a knee injury in training”, with the defender returning to his club “to await further diagnosis”.

“I can’t tell you how serious it is because he’s yet to have scans,” Three Lions boss Southgate said.

“What was upsetting was to see he was in a fair bit of pain and the fact was there was nobody around him when the injury happened, so I didn’t like that element of it.

“But we’ve just got to wait and see what the scans show and we’re all hopeful for him that it’s not what it might be.

“But it’s not a good situation. I don’t see him being involved in the games with us, that’s for sure.”

The injury is a gut punch for player, club and country.

Gomez suffered a season-ending anterior cruciate ligament injury while playing for Southgate’s England Under-21s in October 2015 and injured his ankle representing the senior team in a friendly against Holland in March 2018.

The defender sustained a broken leg later that year and could miss another lengthy period for Liverpool, who have already lost defender Virgil van Dijk to a serious knee injury.

Asked if he feared Gomez could have sustained an ACL injury having said “we’re all hopeful for him that it’s not what it might be”, Southgate added: “We can’t speculate on the exact nature of the injury. It’s not possible until we’ve seen scans.

“So, as I say, my immediate thoughts are with him because he’s had some difficulties with injury in the past, so we’re hoping as much as we possibly can and praying that it’s not going to be a long-term one but we just have to see.”