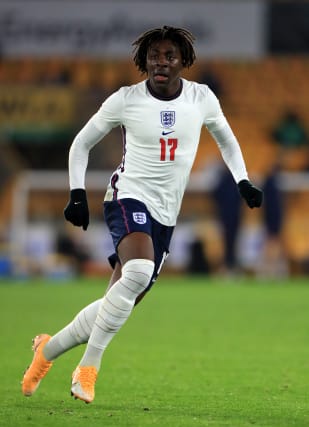 England Under-21 midfielder Ebere Eze credits his early heartbreak for his rapid rise to the Premier League.

The 22-year-old has also revealed his relief at being able to help provide for his family.

Eze made a £19.5million move to Crystal Palace from QPR in August having been released by Millwall in 2016 – after also being allowed to leave Arsenal as a 13-year-old.

He is now preparing for England U21s’ Euro 2021 qualifier with Andorra on Friday and believes he has been shaped by his experiences.

“It has built huge resilience in me, being released,” he said. “I’m sure loads of players will tell you this, being released is not the best feeling and you’re not in the best space mentally.

“You have to keep moving forward. For me, I feel that’s something that was put into me, was forced into me after being released. I had to get up and be strong.

“But it was more the support my family and people around me that continue to instil that faith in me and being religious as well.

“It wasn’t easy. I didn’t come from a rich family or anything like that, my parents did what they could and try their best to help me and my brothers and my sister to get through life.

“Of course, I know the struggle that they’ve been through, it wasn’t easy for them to even gather money for us to look after us.

“That’s why it was more of a relief because I can take some pressure off them and help them a bit and it’s not much of a hand to mouth situation.”

Eze, who has five U21 caps, has helped the Young Lions qualify for next year’s tournament in Hungary and Slovenia with two games to spare.

It came despite drawing 3-3 in Andorra, ending their hopes of a 100 per cent record.

It was the first time they had dropped points in qualification in over four years and Eze believes England can use the result to guard against complacency.

He said: “Yeah, of course, we’re not happy with that result, with that performance. It was a tough game to play but we should be coming away with a result.

“We didn’t and we actually look at that and try to move on and not allow that to happen again. We’ve got another opportunity against them and we’re going to put things right.”