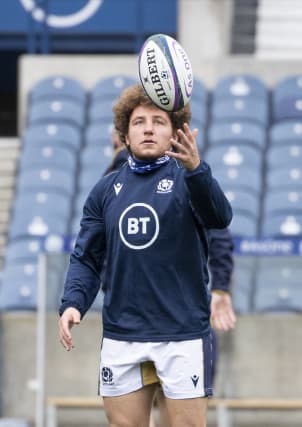 Head coach Gregor Townsend believes Duncan Weir will bring a pride and passion to the Scotland jersey after winning a recall to the starting team for the first time in four-and-a-half years.

The fly-half last made the starting XV in a clash against Ireland back in March 2016, but injuries to Finn Russell and Adam Hastings, coupled with his own career-best form for Worcester, have brought him back to the fore for Saturday’s Autumn Nations Cup opener against Italy.

Weir was brought back by his former Glasgow coach Townsend during the Six Nations earlier in the year, taking the field as a replacement against France, and now has the chance to nail down a spot in Florence. Italy already holds fond memories for the 29-year-old, who struck a decisive drop goal during a tense finale in Rome six years ago.

“It’s a testament to his character,” said Townsend, of Weir’s long road back to the side.

“When he has had the chance to play for Scotland he’s been very proud and passionate. He always gave 100 per cent when he played and he still does.

“You can see the effort he puts in on defence and in support play and in the time he spends on the training field. There are experiences he’s had now, with different coaches and different environments, and he’s in his late 20s playing in a position where you do learn.

“He’s playing great rugby and it’s a bonus for us with those two players injured to be able to call on someone who is playing regularly at Premiership level and is confident in what he’s doing.”

Townsend’s team shows a total of four changes to the one which triumphed over Wales in their previous outing at the end of last month, their third win in a row either side of the coronavirus shutdown.

There are two further changes among the backs, with Sam Johnson returning at number 12 and winger Duhan Van Der Merwe moving up from the bench in place of Blair Kinghorn. Sean Maitland, recalled to the training group after being dropped in the aftermath of his breach of quarantine protocol with the Barbarians, has no place in the matchday squad.

In the pack, Stuart McInally replaces Fraser Brown at hooker after the latter suffered a head injury in training and has been named as one of skipper Stuart Hogg’s two vice-captains alongside Jamie Ritchie.

Townsend admitted an element of uncertainty as to how soon Brown would be cleared to play again, but is more than happy to have a trusted player to call on.

“Fraser picked up a head injury on Tuesday, a scrum collapsed,” he said. “He had symptoms yesterday, with a headache, and that’s ruled him out of the weekend, but he seems in a better place today. Hopefully he’ll get through the required protocols and be available for next week or the following week.

“Stuart was always going to get an opportunity to start this weekend anyway. He’s been training really well and the scrummaging side of his game has really improved. That’s becoming a real strength of ours.”

Townsend has indicated he will regularly rotate his team over the next three games as he assesses different options ahead of the big prize – next year’s Six Nations.

“There’s a few positions where we have real competition and are not certain yet what our best would be,” he said.

“We want to get to a scenario where we play finals weekend putting our best team out and with three Test matches back to back to back you may see changes. We’re looking forward to seeing these guys grab their opportunities.”