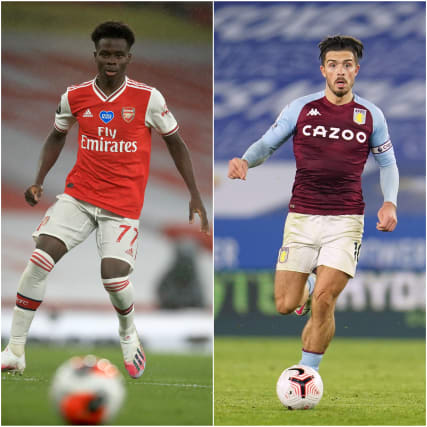 Bukayo Saka admits he and his Arsenal team-mates could not keep Jack Grealish quiet at the weekend despite specifically analysing the Aston Villa captain ahead of the game.

Grealish was one of the star performers as Villa left the Emirates Stadium with a well-deserved 3-0 victory to move within three points of the Premier League summit.

The 25-year-old has enjoyed an impressive season to date and could make his second England start when they face the Republic of Ireland in a Wembley friendly on Thursday night.

Saka highlighted Grealish as the most impressive player he saw during his first senior international camp last month.

He then revealed Arsenal manager Mikel Arteta and his coaches looked at ways to stem Grealish’s impact on Sunday – although any plans clearly had little effect.

“He is a top player,” Saka, who scored an own goal in the game, said when asked about Grealish.

“When I came here before in my first camp he was probably the player who impressed me the most in training.

“Before we played against Villa at the weekend we did analyse him and we picked him out as one of their main threats and he showed it in the game.

“He was amazing from start to finish so it is going to be good to play with him and not against him this week.”

The defeat to Villa leaves Arsenal in the bottom half of the table, having now lost four of their opening eight league games.

Saka, who like Grealish will be pushing for another chance to impress for the Three Lions this week, said England boss Gareth Southgate told him to use this time to clear his head of the result.

“He just asked me how the (Villa) game was, how I was feeling about it,” Saka told beIN Sports.

“I just told him how I was disappointed that the result wasn’t so good and that we will bounce back after.

“But he told me it was an opportunity for me to focus here, get that out of the way, clear my head and just have a positive week here with England.

“After the game the boss (Arteta) did say to us that this is the beauty of this sport, that we will experience many highs and lows.

“Last season when we came back from lockdown we lost two games in a row and things were looking really difficult for us.

“But if you look at how we finished the season we won the FA Cup so we went from low to high really quick, we just have to keep going, keep our heads down.

“I’m here with England now so just want to focus on that and we will take the games in our stride when we get back with Arsenal – I’m sure we will do, 100 per cent.”