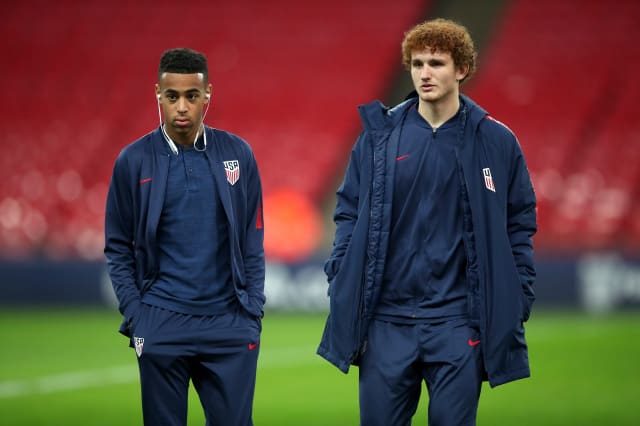 RB Leipzig star Tyler Adams says the United States are planning a show of support for racial justice when they return to action in Wales for the first time since the death of George Floyd.

Minneapolis resident Floyd, a black man, died in May when a police officer pressed his knee against his neck for several minutes, with his killing sparking anti-racism protests across the USA and the world.

Several American players, including Adams, appeared in Juventus midfielder Weston McKennie’s ‘Enough is Enough’ video in June – and the USA team will now make an anti-racism stand ahead of their Swansea friendly on Thursday.

“There have been internal discussions about that,” said Adams, who had ‘Black Lives Matter’ written on his left boot and ‘Justice 4 George’ on his right when he returned to Bundesliga action after Floyd’s death.

“We’re kind of waiting until matchday to show how we can bring recognition to the situation.

“Without giving too much away, we just want to continue to educate people about what’s going on and continuing to happen.

“There will be a little something on game day that we do. The internal discussions have been great, within the team supporting one another, sharing each other’s beliefs, and how people perceive certain situations and their opinions on it.

“Those open and difficult discussions have been really helpful to the team.”

The Americans could take a knee at the Liberty Stadium as, following Floyd’s death, the US Soccer Federation repealed the policy that required players to stand during the national anthem.

The policy was adopted in 2017 after US women’s star Megan Rapinoe knelt in peaceful protest against police brutality and the oppression of black people in America, a move inspired by San Francisco 49ers quarterback Colin Kaepernick.

The USA have not played since a 1-0 friendly victory over Costa Rica at the start of February.

Coach Gregg Berhalter has mostly called on his Europe-based players for the friendlies against Wales and Panama, with the squad’s average age a tender 21 years and 300 days.

But nine players are at clubs playing in the Champions League, including rising Borussia Dortmund star Giovanni Reyna, who is set to make his international debut at the Liberty Stadium.

Reyna, who was born in Sunderland when his father Claudio was playing for the Black Cats, and Valencia’s former Arsenal academy product Yunus Musah both qualify to play for England.

Musah was capped by England from under-15 to under-18 level before being called up into the USA squad this month.

“Gio has experience in the past year of representing Dortmund at a high level and it’s good to bring his quality to the team,” Adams said.

“I would hope that a lot of players who come into camp and can play for multiple countries represent the US because they really want to.

“That’s super important, when they put the jersey on it means something to them.

“With the quality we have with our national team I think it’s more attractive for players to want to represent the US, and that’s a huge positive.”