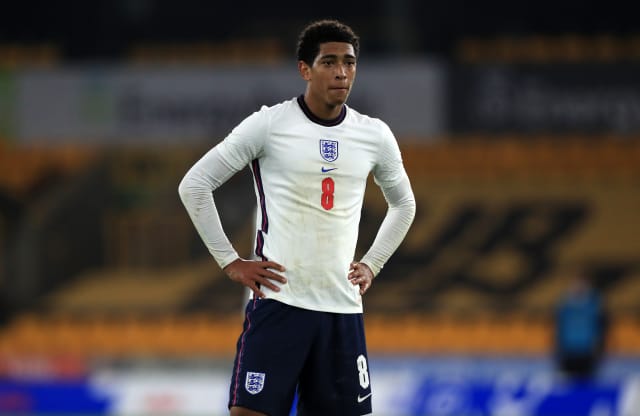 Jude Bellingham is in line to become the third-youngest England player in history after being drafted into Gareth Southgate’s squad, with the “fantastic” 17-year-old talent quickly making an impression on Tyrone Mings and his other new team-mates.

Injuries to Trent Alexander-Arnold and James Ward-Prowse meant an early change to the Three Lions squad facing crunch Nations League matches against Belgium and Iceland after Thursday’s friendly against the Republic of Ireland.

Bellingham was promoted from the Under-21s as a result of the withdrawals, having followed up last season’s outstanding displays at boyhood club Birmingham since his summer move to German giants Borussia Dortmund.

The teenager’s inexorable rise shows no signs of abating and the midfielder could become the third-youngest player in the Three Lions’ history should he feature against Ireland on Thursday aged 17 years and 136 days.

Only Wayne Rooney and Theo Walcott would have represented the senior side at a younger age, with Aston Villa defender Mings already impressed by a talent forged by the blue half of the city.

“It doesn’t surprise me,” the centre-back said. “I get surprised every time I get called up so I’m not necessarily sitting here surprised when other people get called up.

“But I’ve had the opportunity to see him in training over the last couple of days and what a fantastic talent he looks.

“For someone who’s achieved so much in his career in such a short space of time, he seems to be very grounded and very humble, so I wouldn’t say that I was surprised, no.

“But I think it’s a huge occasion for him and I don’t think it should be overshadowed by what should or shouldn’t have happened. I think it’s a fantastic occasion.

“I remember my first call-up. I was a lot older than him but I remember the feelings I had surrounding that so I think fair play to him.”

Bellingham and Mings were among those to arrive at St George’s Park on Monday, with Ben Chilwell in the tranche that arrived on Tuesday – and the Chelsea left-back already likes what he sees.

“Very excited for him and 17 years old. It’s a massive, massive achievement for someone to play for England let alone at 17.

“I’ve seen him play for Birmingham and obviously he’s been doing very well for Dortmund so thoroughly deserved and very, very happy for him.”

Bellingham will be hoping to make an impact during an international fortnight that Marcus Rashford may yet be ruled out of having been injured playing for Manchester United over the weekend.

That is far from the only question mark hanging over Southgate’s side, with the venue of their final match of a challenging 2020 still a major one.

The location of next Wednesday’s clash against Iceland remains up in the air, with the Football Association awaiting confirmation of whether the visitors can come to Wembley given they are facing Denmark over the weekend.

New regulations that do not exempt sportspeople have come into effect after a new strain of Covid-19 was found in Denmark, meaning Iceland’s players would have to isolate if arriving from Sunday’s game in Copenhagen.

The PA news agency understands that UEFA put Albania forward as a potential neutral venue for the match, while the FA has held informal conversations with their German counterparts about it possibly being moved there.

Asked if the uncertainty affects England’s preparations, Chilwell said: “Not really, to be fair, no.

“I think obviously we’ve got two massive games before that, which we’re fully focused on at the moment. Obviously the game that’s coming up next and then take it as it comes after that.

“But as long as we’re all training hard and prepared for any situation.

“Training’s the main thing and if we can keep training to hopefully play the game and we’ll just see what happens.

“But stuff we can’t affect later, there’s no point thinking about that.”