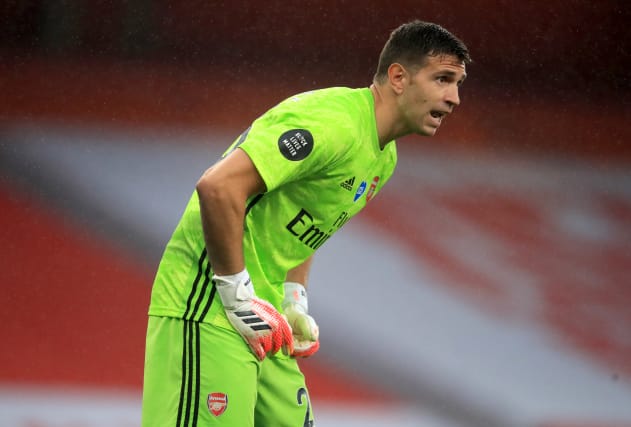 Emiliano Martinez was full of praise for his defence after he kept a clean sheet on his return to Arsenal as Aston Villa left the Emirates Stadium with a well-deserved victory.

While the Gunners were misfiring, Dean Smith’s side got back to winning ways having lost two consecutive Premier League home games before heading to north London.

An Ollie Watkins brace added to Bukayo Saka’s own goal to give Villa a comfortable 3-0 win – and the margin of victory could have been greater still.

John McGinn had a first-minute strike ruled out by VAR while Jack Grealish saw an effort cleared off the line when the visitors were purring in the second-half.

Smith labelled the win as a better performance than when his side thrashed reigning champions Liverpool 7-2 last month.

Another man who was pleased with the result was goalkeeper Martinez, making his first return to Arsenal after leaving in the summer.

While he has earned plenty of plaudits for his performances since making the move to Villa Park, the 28-year-old hailed the collective effort.

“I’m delighted with how my defenders are playing,” he said.

“Sometimes you have saves to make, sometimes I can’t make any saves but the way my back four is defending is outstanding.

“I’ve kept four clean sheets because of them, I take the work-ethic of the whole team, coming after two defeats at home.

“That’s three wins in a row away from home now. I don’t know when it was the last time we won against Arsenal here? I’m delighted, to be honest, I lost my voice as well.”

While Martinez may have been delighted, the man who decided to sell him in September was anything but.

But, despite naming the same starting line-up, his side were not at the races and the Spaniard is keen to see the right reaction from his players ahead of their trip to Leeds after the international break.

“I would like to have a game tomorrow morning to get this one out of the system. But as well, in difficult and bad moments, you get a lot of things,” he said after the defeat.

“I want to see how people react, how players react and if we start to blame each other or if we just look at ourselves in the mirror and then try to become much better than what we’ve shown tonight, which we are.

“Then, after that, get everybody back together and get the fighting spirit, the belief and the commitment that we’ve shown since I got here, into every game.