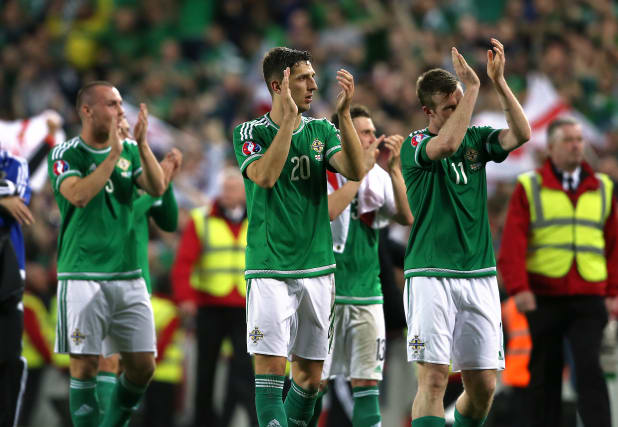 Craig Cathcart says Northern Ireland will draw on both the joy and the pain of the past two qualification campaigns as they prepare for Thursday’s Euro 2020 play-off final against Slovakia.

Northern Ireland are looking to secure their place at a second consecutive European Championships, but memories are still fresh of narrowly missing out on the last World Cup.

They booked their ticket to Euro 2016 with a 3-1 win over Greece – one of the most famous nights at Windsor Park.

With only 1,060 fans to be allowed in on Thursday amid the coronavirus pandemic, it will not be possible to recreate that night in full but Cathcart can only hope for a similar result.

“I have fond memories of that game,” the Watford defender said. “I remember a lot about the game – maybe not so much about after it!

“I remember going ahead in the game and feeling comfortable and confident that we were going to do the job.

“After the game it was great, everyone on the pitch together and just that feeling of knowing we had done it…

“It was just the whole feeling of qualifying and everyone was ecstatic, so to get the chance to experience that feeling again, I’m sure it will drive a lot of the lads on in the squad.”

Two years later it was a different story as Northern Ireland suffered a controversial defeat to Switzerland, with Ricardo Rodriguez’s disputed penalty at Windsor Park proving decisive as the two-legged tie ended 1-0 on aggregate.

Cathcart did not play in the tie due to injury but was with his team-mates in the dressing room at Windsor Park after the first-leg loss. The pain of that night, he believes, has been a key factor this time around.

“I think that motivated the whole campaign really from the start,” he said. “We knew we were so close to getting to a World Cup so we wanted to start the Euro campaign as well as we could and that’s what we ended up doing.

“But that was a long time ago now and the team has changed since then. I don’t think we can look back on that too much, we have to focus on this game more than anything.”

There has been a significant turnover in the squad since the Switzerland disappointment, with the likes of Gareth McAuley, Chris Brunt, and Aaron Hughes moving on while younger faces including Jamal Lewis, Bailey Peacock-Farrell and Gavin Whyte have made their mark.

“We have a lot of experience in the squad and we’ve also got a good mix of young players as well, so we have a good balance,” Cathcart said.

“Being there and having done it before, as a group of older players we want those younger players to have the chance to experience it as well.

“I think everyone in the camp is pulling in the right direction and we know we need to get the job done now.”

Reaching Euro 2016 ended a 30-year wait to play at a major championships.

While success this time around could not match that, Cathcart wondered if it might be a bigger achievement given the task Northern Ireland faced after being paired with Germany and Holland in the group stages.

“I would definitely put it on a par, it’s never easy,” he said. “If you look at the group we got, it might make it a better achievement.”