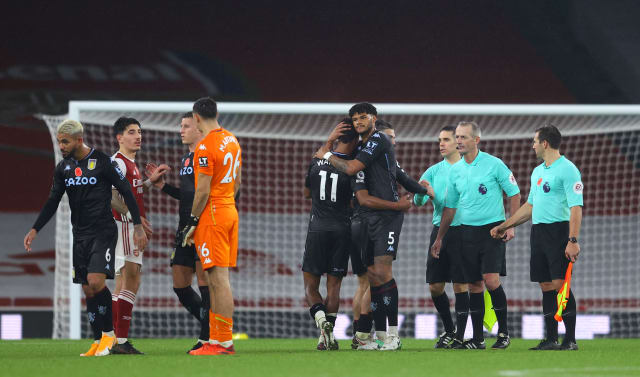 Villa left the Emirates Stadium on Sunday night with a well-deserved 3-0 win as a Bukayo Saka own goal and Ollie Watkins’ double settled the game in their favour.

The margin could have been greater had John McGinn not seen a goal ruled out by VAR in the opening minute.

Villa now sit sixth in the table, three points off top spot with a game in hand over all of the teams ahead of them.

Smith believes the all-round display, especially having shipped seven goals across losses to Leeds and Southampton, even eclipsed their 7-2 win over reigning champions Liverpool last month.

“Personally I thought it was as good a performance as when we beat Liverpool 7-2,” he said.

“The work from the whole 11 players without the ball to restrict a good Arsenal team was extremely pleasing.

“It is up there with the Liverpool one, if not better. We were so composed and played with such intensity either with or without the ball today.

“We make it hard for teams to break through us, we have conceded seven in the last two games and it is easier to look in the goals conceded column.

“I had no doubts that defensively we were still strong and I was pleased the players went out and showed that today.”

Despite having improved defensively since Arteta’s arrival in December, their attacking statistics have dropped off of late.

Captain Pierre-Emerick Aubameyang has not scored from open play in the league since the second weekend of the campaign and has had just 10 shots across Arsenal’s opening eight matches.

“That’s a team function and a collective thing that we have to do more,” Arteta replied when asked if he needed to do more to get Aubameyang back among the goals.

“We certainly are getting in some situations but the end product is something we have to improve.

“About his position, his movement and where we can find him, of course, we can talk about ‘is this the right or the wrong place for him?’

“But when things were working and he was scoring, that debate wasn’t there.

“What is certain is that with these numbers, scoring this amount of goals, it is impossible to be fighting with the top teams.

“So we have to maintain the numbers that we had defensively in our organisation and for sure we have to improve our numbers attacking-wise if we want to be challenging there. You want to be consistent winning football matches, for sure.”

“I don’t feel like we were the team we are supposed to be,” he added.

“We performed below our standards, our ability, and I didn’t see the spirit for the first time since I am here that I see every day in training and I see every day when we compete.

“And this is totally my fault because it is why I am here, I am responsible for that, to make sure the team performs and competes at the highest level every three days. Today I haven’t managed to do that.”