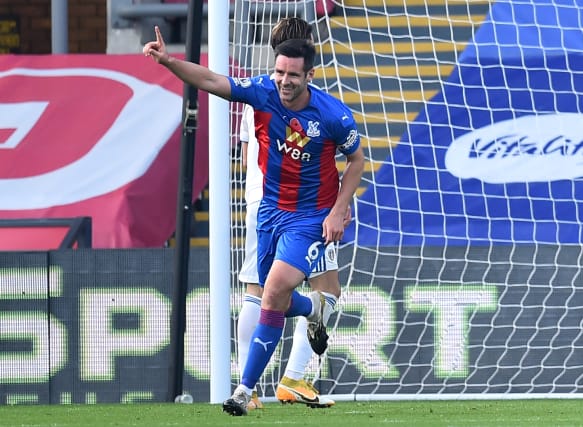 Scott Dann is pleased Crystal Palace can look up the Premier League table after Saturday’s comprehensive 4-1 victory over Leeds saw them rise to seventh.

The stand-in captain opened the scoring at Selhurst Park with his first goal in almost three years before strikes by Ebere Eze and Jordan Ayew sandwiched Helder Costa’s own-goal.

It moved Roy Hodgson’s team back into the top half and ensured they bounce backed following the 2-0 loss at Wolves last week which resulted in them falling to 13th.

Dann said: “It’s massive for us because the league is close. A lot of teams are picking up points, so if you lose a couple on the bounce you start to drop a few places.

“On the back of the Wolves game, it was nice to get back to winning ways and start to look the opposite way.”

Long-serving defender Dann wore the armband in Luka Milivojevic’s absence – after his red card at Molineux – and got on the scoresheet in the 12th minute with a fine header from an Eze corner.

It was the 33-year-old’s first goal since December 9, 2017 and ended a drought which saw him fail to find the net in each of the last two seasons; albeit he spent a lengthy period on the sidelines with a serious knee injury.

He told the official club website: “It feels longer than that! No, I was out with an injury for a long time, but it’s nice to contribute, to get on the scoresheet and get us under way. It was a good performance from start to finish.”

Boss Hodgson was happy to see his team come out on the right side of a contentious offside call this time.

At Wolves, Palace were denied a penalty when video assistant referee found Patrick van Aanholt to be in an offside position before Milivojevic was sent off after a review for a challenge on Joao Moutinho.

Last month the Eagles were also denied a goal in the 1-1 draw with Brighton when Michy Batshuayi was adjudged to be beyond the last defender and so when Leeds forward Patrick Bamford was ruled offside in the first half by a close call, it left Hodgson with a sense of deja vu.

The 73-year-old added: “Every week – last week for example – there are so many decisions that everyone wants to contest that are not really correct in terms of the future of the game, so why should this week be any different?

“Unfortunately you’re speaking to the wrong man if you want sympathy for offside decisions and goals disallowed for unbelievably tight calls.”

Leeds’ woes in the capital continued despite Bamford eventually getting on the scoresheet against a side where he endured a difficult nine-game loan spell during the 2015-16 campaign.

The last time Leeds triumphed in London was December 9, 2017 – coincidentally the day of Palace defender Dann’s most recent goal before Saturday – when the Whites won 3-1 at Loftus Road and this latest reverse made it back-to-back losses after the 4-1 thrashing by Leicester on Monday.

“The performance in the last game (against Leicester) was a performance which was not satisfactory,” Bielsa said.

“It left a lot of space for criticism. This game has other characteristics, in the collective, in the individual and in all the aspects.

“All the defeats are complicated. When there’s two defeats in a row it increases how complex it is. And if in all games we concede four goals and only score one, it’s going to be a hard reality.”