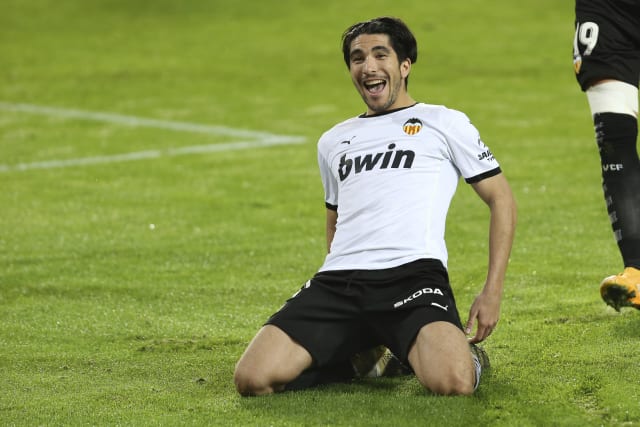 Real Madrid crashed to a 4-1 defeat at Valencia as Carlos Soler netted a hat-trick of penalties.

After Karim Benzema had put Real ahead in the 23rd minute, Soler’s first spot-kick and a bizarre Raphael Varane own goal had the hosts 2-1 up at the interval.

Soler subsequently added another penalty nine minutes into the second half, and then his third just after the after the hour mark following a handball by Sergio Ramos.

It leaves Zinedine Zidane’s defending champions fourth in the LaLiga table, four points behind leaders Real Sociedad, who won 2-0 at home against a depleted Granada whose request to have the game postponed had been rejected.

Nacho Monreal and Mikel Oyarzabal, with a penalty, scored in the first half before Willian Jose had a spot-kick saved by Granada’s Angel Jimenez.

Sociedad’s Robin Le Normand was sent off in the closing stages and the table-toppers then kept out a penalty themselves as Alex Remiro denied Darwin Machis.

Villarreal are second, two points behind Sociedad, after a 3-1 win at Getafe.

Paco Alcacer’s early opener for the visitors was swiftly cancelled out by Mauro Arambarri, only for Manu Trigueros to restore Villarreal’s lead moments later. Gerard Moreno added their third after the break.

Real Valladolid registered their first win of the season as they beat Athletic Bilbao 2-1 at home, with Fabian Orellana (penalty) and Marcos De Sousa netting before Inaki Williams’ late reply from the spot.