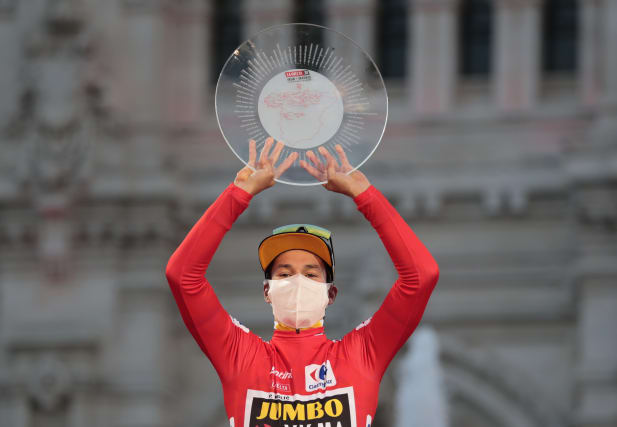 Pascal Ackermann won stage 18 of the Vuelta a Espana as Primoz Roglic secured the overall title for a second year running.

Great Britain’s Hugh Carthy (EF Pro Cycling) could celebrate a podium finish as he came third, one minute and 15 seconds behind Roglic, and Ireland’s Dan Martin (Israel Start Up Nation) was fourth at two minutes and 43 seconds.

Roglic, who finished second in the Tour de France general classification in September, said on lavuelta.es: “It’s beautiful to finish the season like this. I always say every victory is beautiful.

“It’s really hard to win. So it’s difficult to compare (with 2019). I’m just super happy that I could win and to finish the season like this.

“I don’t know (if I’m the best Grand Tour rider). For sure I was the best in this Vuelta. There are still races I didn’t win yet, more challenges, but first of all today we celebrate.”

At the start of Sunday’s stage, Carapaz’s team-mate Chris Froome received his trophy for triumphing at the 2011 Vuelta.

The Briton was officially declared the winner in July last year following a doping case involving Juan Jose Cobo that saw the Spaniard stripped of the title.

At the time Froome was recovering from a horror crash during a reconnaissance ride at the Criterium du Dauphine that left him with injuries including a broken femur and broken ribs.

The 35-year-old seven-time Grand Tour winner, whose final position in this year’s Vuelta was 98th, said on Sunday: “It’s a really special victory.

“I have really special memories obviously looking back to this period, but also the way I was told about this victory, when I woke up the day after my big accident last year.

“I was in ICU still when I was told: ‘Congratulations, you’ve won La Vuelta.’ That was a really strange feeling. It was such a special race to me.

“It’s where I first discovered myself as a Grand Tour rider and a GC contender. It gave me confidence to then go on to the Tour de France, to keep targeting Grand Tours. I certainly hope next season I’ll be here in a different capacity.”

Meanwhile, Germany’s Lisa Brennauer was overall winner of the Ceratizit Madrid Challenge, the three-day women’s version of the Vuelta.