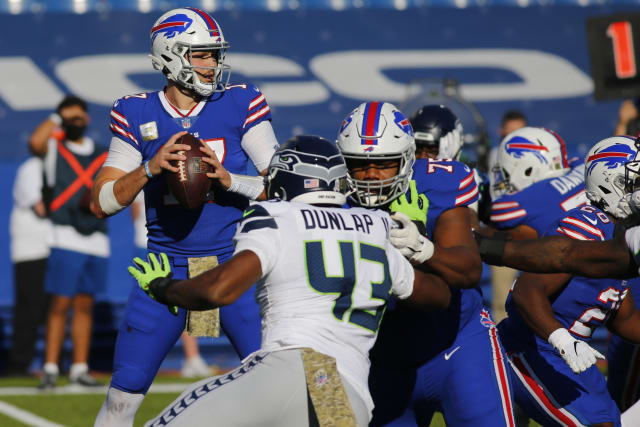 Josh Allen won his quarterback duel with Russell Wilson as the Buffalo Bills beat the Seattle Seahawks 44-34 to move to 7-2 for the first time since 1993.

Playing the day after the death of his grandmother, Allen threw for 415 yards and three touchdowns to inflict only the Seahawks’ second defeat of the season.

He found Isaiah McKenzie and Tyler Kroft in the end zone to open up a 17-0 first quarter lead and though a Wilson sneak cut the deficit, Allen found Gabriel Davis for another score and followed Zack Moss in adding running scores to pad the Bills’ lead – which proved vital as DeeJay Dallas pulled one back on the ground for Seattle while Wilson threw touchdowns to DJ Moore and DK Metcalf.

The Kansas City Chiefs overturned an early 14-3 deficit to beat the Carolina Panthers 33-31 and move to 8-1.

Teddy Bridgewater found the returning Christian McCaffrey and Curtis Samuel for touchdowns in the first quarter but once Patrick Mahomes connected with Demarcus Robinson with the first of his four touchdown passes, the comeback was well and truly on.

Mahomes hit running back Clyde Edwards-Helaire for another score and Tyreek Hill for two while Travis Kelce had 10 catches for 159 yards, and though running scores from Bridgewater and McCaffrey kept it close the Chiefs proved too strong at home.

The Baltimore Ravens moved to 6-2 with a 24-10 win over the Indianapolis Colts, Chuck Clark hurdling fallen Colts quarterback Philip Rivers for a scoop and score on defence which was added to by running touchdowns from Gus Edwards and quarterback Lamar Jackson.

Dalvin Cook continued his dominant form for the Minnesota Vikings, running for 206 yards and two touchdowns in a 34-20 win over NFC North rivals the Detroit Lions – who lost quarterback Matthew Stafford to concussion protocols in the fourth quarter.

Receiver AJ Brown found the end zone for the fifth straight game as the Tennessee Titans beat the Chicago Bears 24-17 while the New York Giants beat Washington 23-20. Giants QB Daniel Jones now has four wins from four appearances against Washington but only one in 17 games against the rest of the NFL.

The Houston Texans beat the Jacksonville Jaguars 27-25 despite 146 receiving yards for the Jags’ DJ Chark, while Matt Ryan threw three touchdown passes in the Atlanta Falcons’ 34-27 win over the Denver Broncos.