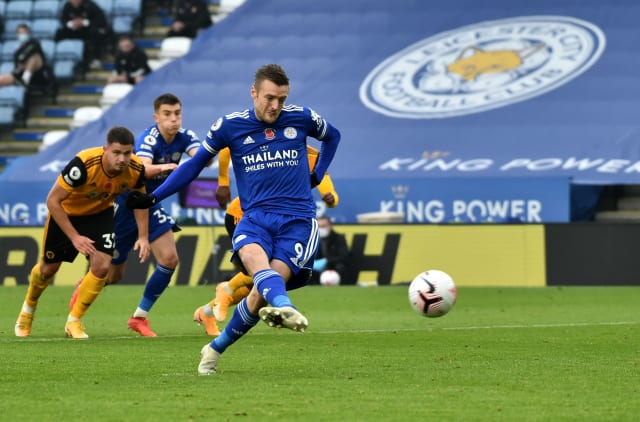 Jamie Vardy fired Leicester to the top of the Premier League after a gritty 1-0 win over Wolves.

The striker’s early penalty sent Brendan Rodgers’ side to the summit following a third straight victory.

The Premier League’s joint eight-goal top scorer was also denied a second from the spot by Rui Patricio’s save.

The Foxes now go to Liverpool on Saturday, having already won at Manchester City, in the latest test of their title credentials.

Max Kilman fired Wolves’ best chance over but the visitors lacked their usual composure and tempo to miss their latest chance to move into the top four.

They were the only current team in the Premier League who Vardy was still to score against after six previous attempts but the striker ended that drought after 15 minutes.

A quiet opening burst into life in controversial style when Kilman handled Dennis Praet’s ball into the box.

Wolves argued the ball came at Kilman too quickly but any appeals were ignored.

The omens looked good for Leicester with the Foxes having lost just one of their previous 45 home league games when scoring first.

They were sharper than subdued Wolves, winning the ball back and closing down with Wesley Fofana keeping Raul Jimenez on a tight leash.

The Foxes dominated and Christian Fuchs drove a yard wide before Vardy wasted a chance to double the lead six minutes before the break.

Rayan Ait-Nouri’s awful touch allowed James Justin to steal in and he was brought down in the area by the defender.

This time, though, Vardy’s penalty was too close to Patricio who dived right to parry with the rebound hitting Vardy and dropping wide.

It was Leicester’s eighth penalty after just eight games this season but the miss was a let-off for Wolves as, while they finished the half strongly, they were comfortably second-best.

They had not looked like a team with top four aspirations and Youri Tielemans headed wide before firing over as Leicester searched for a second.

But it was too late and Harvey Barnes almost added a second for Leicester, only for Kilman’s crucial block to direct the ball over late on.