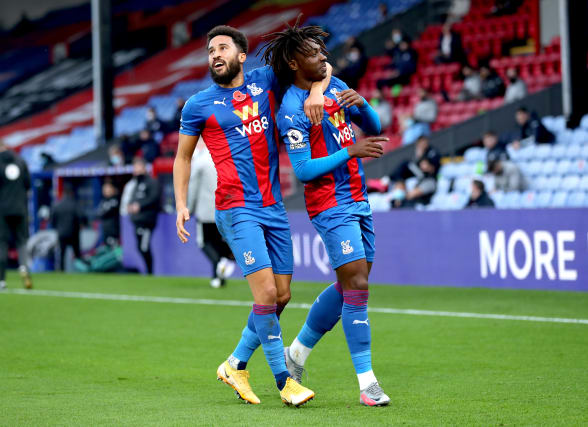 Ebere Eze has promised Crystal Palace fans there is plenty more to come after the summer signing starred in Saturday’s 4-1 win over Leeds.

The 22-year-old grabbed a first assist and goal for his new club at Selhurst Park, curling in a sumptuous free-kick to cap a superb individual display.

It was only Eze’s third start in the top flight, but showed why the Eagles parted with £20million for the services of the former QPR playmaker in August.

He said: “I think it is only the start. We are working hard. I am learning a lot and I am growing as a player.

“And I think that is the most important thing – as long as I keep learning, keep pushing and keep working with the guys around me.

“I have loads of people to look at, so it is a great opportunity for me.”

Eze linked up with left-back Patrick Van Aanholt on a number of occasions against the divisional new boys and – more encouragingly – with Wilfried Zaha throughout the 90 minutes.

After he set up stand-in captain Scott Dann for Palace’s opener, Eze rewarded the faith placed in him by boss Roy Hodgson when he fired home via the crossbar after 22 minutes.

The only downside for the forward was no family in attendance to witness a special first Premier League goal, but games being played behind closed doors due to the coronavirus pandemic have given the youngster one less problem to think about.

“It is a great moment for me and a proud one for me and my family,” Eze added. “I am grateful to God that it has come and hopefully the first of many.

“To be fair, I normally have a headache for tickets because so many people want to come; my mum, my dad, my two brothers, my sister, my girlfriend and all my friends.

“Everyone loves to come to the games. Unfortunately they couldn’t be there, as well as the fans, so that’s a disappointment, but hopefully soon.”

At the start of proceedings Leeds appeared to instruct Stuart Dallas to man-mark Eze, but the utility man quickly realised it was a thankless task with the England Under-21 international given a licence to roam across the pitch.

Palace caused the visitors a number of problems down their right with Van Aanholt’s cross deflecting in off Helder Costa while Zaha picked out Jordan Ayew from that position for the hosts fourth goal 20 minutes from time.

Eze said: “I want to get on the ball and do my thing and of course if there is a guy behind you and always on you, it is difficult. But I am just grateful for the performance from the boys, it paid off.”

The comprehensive victory moved the Eagles into the top half and on to 13 points after eight games, but the Premier League takes a break now with international football back on the agenda for the next week-and-a-half.

For the midfielder, that means more opportunities for the Young Lions with Aidy Boothroyd’s side set to face Andorra and Albania at Molineux over the coming days.

Asked about the lack of break, Eze replied: “Of course but I enjoy it and I am just grateful and thankful that I have got this blessing of a job.”