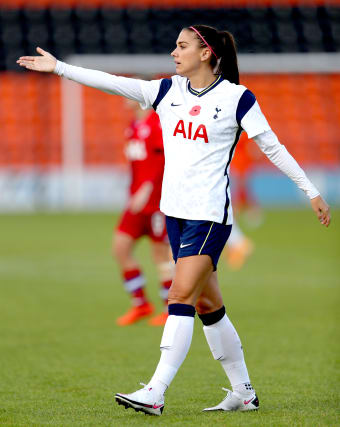 United States striker Alex Morgan is delighted to be “back on the field” after making her long-awaited Spurs Women debut.

The two-time World Cup winner had not played for over a year after giving birth to daughter Charlie in May and working her way back to fitness.

But Morgan, 31, who has scored 107 goals for the US, came off the bench for the final 21 minutes of Spurs’ 1-1 draw with Reading at The Hive on Saturday.

“This is a good starting point,” Morgan told Spurs TV.

“It just feels good to get back on the field for the first time in more than a year, so I’m happy about that.

“Obviously I’m not too happy about the result but I just had to start to get some minutes and build from there, so I’m pretty happy that this is a good starting point.

“I think my fitness, it’s getting back there, it’s just going to take a little bit of time – obviously with a matter of changing direction, sprints and everything, I’ve just got to get minutes to get game fit.”

Morgan was able to count on extra support at The Hive as she said: “Yes, my daughter was here with her Spurs kit.

“It’s fun to look up after the match and see her there supporting me.”