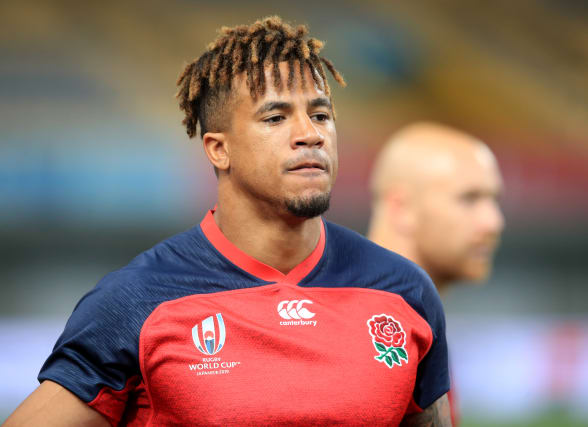 England are optimistic that Anthony Watson faces only a brief spell on the sidelines as Eddie Jones rejects the possibility of fielding an experimental side against Georgia.

Watson limped off with an ankle injury 53 minutes into the 34-5 victory over Italy a week ago that clinched the third Six Nations title of the Jones era, ruling him out of Saturday’s Autumn Nations Cup opener at Twickenham.

The Lions wing has returned to his club Bath for rehabilitation, but he could be back for the visit of Ireland on November 21.

Ollie Thorley replaced Watson at the Stadio Olimpico and Joe Cokanasiga is also a possibility for the wing vacancy in the 36-man training squad that has gathered at England’s Teddington training base to begin preparations for the Georgia opener.

Adding to Jones’ options is Elliot Daly, the Saracens utility back who has recovered from a shin problem and will be looking to reclaim the number 15 jersey from George Furbank.

Also back in the squad are fly-half George Ford and prop Joe Marler following their battles with respective Achilles and knee issues.

If Ford is ready to play it could result in another rejig of England’s midfield, while Marler will put pressure on Mako Vunipola at loosehead prop.

“They’re all good, experienced Test players and we welcome that experience back because it puts more pressure on everyone in the squad to keep getting better,” Jones said.

Scrum-half Dan Robson will have further opportunities to add to his three caps over the coming weeks after Jones confirmed that Willi Heinz faces a spell out because of a calf injury.

Robson has been electric for Wasps this season and with Heinz out of the picture, he can stake his claim behind Ben Youngs.

Jones has a number of rookies pushing hard for selection on the basis of their club form, including Robson, Tom Willis, Jacob Umaga and Ollie Lawrence, but Jones insists they must earn their starts.

“Being an old school principle, I know that kids started in year seven, they worked hard and they had to do a year 12 leaving exam,” he said.

“If they did well at that, they got into university. If you get into university you study hard, you get your undergraduate, you go for a masters and maybe a PHD. Test match rugby is a PHD.

“Everyone has got to earn their spot. We’re not giving out caps willy-nilly, that’s not the way we do it.

“That’s for you guys to fantasise about, but we’re picking players for Test rugby. So enjoy your fantasies.”

England have thumped Georgia on their two previous meetings in 2003 and 2011, but Jones insists that this time the world’s 12th-ranked team are determined to prove they are worthy of a place in the Six Nations.

Italy haven’t won a game in the Championship since 2015 and Los Lelos are seen as their likely adversaries if relegation is ever introduced.

“It’s obviously a big opportunity for them to prove their case to be part of the European showcase, which is where they want to be,” Jones said.

“They had a hit out against Scotland a few weeks ago and we anticipate they’ll be well prepared.”