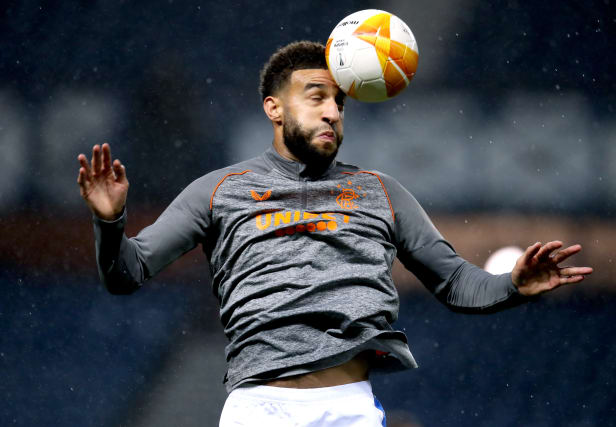 Connor Goldson admits he is determined to exorcise his Hamilton ghosts after being haunted by a blunder during lockdown.

Steven Gerrard’s rampant Rangers welcome Brian Rice’s team back to Ibrox on Sunday as they look to maintain a nine-point lead at the top of the Premiership table.

Optimism is building among the Light Blues legions that this could finally be Gers’ year to end Celtic’s dominance, after an unbeaten start to the season.

But there was a much gloomier vibe in March as Accies stormed Ibrox to claim a shock 1-0 win as the wheels well and truly came off the Govan outfit’s title charge.

Rangers had dominated Hamilton for much of the game but could not find a breakthrough as they desperately sought to keep pace with Neil Lennon’s table-toppers.

But they found themselves dropping 13 points behind their bitter rivals when David Moyo fired home the winner after robbing Goldson as the centre-back dawdled on the ball.

The Englishman found himself with plenty of time to dwell on his mistake as the match proved to be the last domestic game Rangers played before the Covid-19 crisis ushered the UK into lockdown and eventually saw Celtic crowned champions on a points-per-game basis.

“We had about 30 shots at goal and about 100 crosses but we couldn’t score a goal,” recalled Goldson. “I then made a mistake which haunted me through the whole of lockdown.

Now Goldson is determined to keep the Light Blues’ winning run on track as they aim to heap more pressure on Lennon’s under-fire Parkhead outfit.

Goldson added: “I feel we’re a team full of confidence and a team who is winning football matches.

“It doesn’t matter what way it happens, I just feel like we’ve got the know-how in the league to be able to win different games of football – and hopefully that will be the case on Sunday.

“We’ve had big meetings this season, we’ve all spoken about it and we know what’s at stake.

“We’ve all been here long enough now to realise what’s needed in the league and in Europe.

“So, yeah, Sunday is a massive game. I’m sure other people will be looking at it like we can take three points.

“But we’ve slipped up here before so we need to be at it both mentally and physically and make sure we do take the points.”

That point has been reiterated after Gers threw away the chance to claim a memorable win over Benfica on Thursday night.

Goldson put through his own net in the Stadium of Light but Gers recovered to take a 3-1 lead – only to then see the victory slip through their fingers with their late lapse in Lisbon.

But former Brighton stopper Goldson thinks his team need to reflect on the progress they have made in a little more than two seasons under Gerrard.

“Thursday night was obviously disappointing. We had the game wrapped up, or we should have.

“I think we got a little bit complacent towards the end and started to enjoy being 3-1 up away from home against such a great team and in a such a great stadium.

“The game really should have been done.

“We did a debrief yesterday and the manager showed us the good bits of that performance. We knew on the pitch we were playing good football and that we were cutting them apart.

“But we got hurt at crucial moments, which this season is unlike us.

“Now we’ve got a squad that will be raring to go on Sunday as we know it’s a massive three points.”