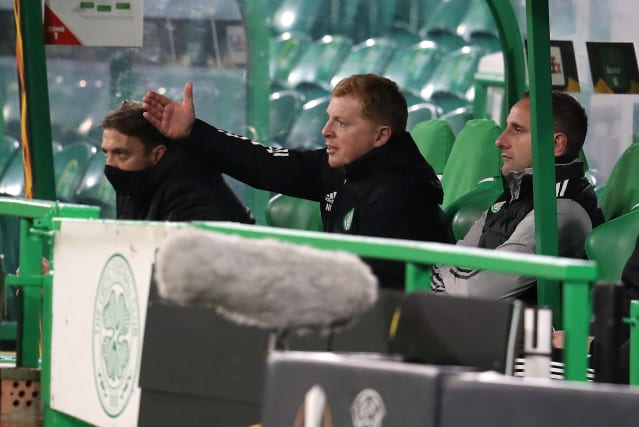 The Hoops were left bottom of Group H with one point from nine following a woeful performance after which criticism flowed from and towards the Parkhead boss.

The Northern Irishman, in his second spell as Celtic manager, is under pressure after just one win in six.

With the Premiership champions looking to make it 10 in a row this season, Lennon accepts eyes will be on him and his players at Fir Park where Celtic will try to stay with leaders Rangers, who have a nine-point lead albeit having played two games more.

The former Celtic captain, said: “Obviously, after a performance like that, you know you will be under scrutiny and under the spotlight.

“Yeah, I need a performance and definitely need a win.

“The players don’t owe me anything with what we have achieved in the last 18 months since I came back.

“But they will be disappointed in their performances on Thursday night, there’s no question of that.

“Application should be a given at this level, at this club, that was lacking and that is on them.

“So whether they do it for me or themselves, they have to do it for the club and respond, rebound.

“We are too inconsistent at the minute. We need to find a level of consistency and performance.

“It is important to win the game because we have a bit of catching up to do in the league.

“But we only have ourselves to blame for putting ourselves under pressure.

“With  performances like that you are going to be criticised but this time it will be justified.”

Skipper Scott Brown insists Celtic have to show their mettle and get back on track against Stephen Robinson’s side.

The veteran midfielder, who has enjoyed lavish success at Celtic since he joined from Hibernian in 2007, said: “They have a good manager and a good philosophy in how they play the game. But it is all about us on Sunday. It is a huge game.

“One good thing about football is that there are so many games coming up and we need to make sure that we are ready for it because it is huge for our season.

“Every game is huge for us. Everyone expects us to win every game.

“I came to Celtic to win every game, win every trophy but the hard times when you don’t get the result and get the performance that you want, it is about how you bounce back.

“Everyone knows every season is not going to be plain sailing but this season has not been good enough, the way we have started, the way we have been playing. We need to make sure we are ready to perform at top levels.

“We don’t accept that performance against Sparta Prague, everyone in the changing room knows it is not good enough.

“It is about the fighting character, the men who are in that dressing room.

“Everyone coming together as one to make sure we are a solid team.”