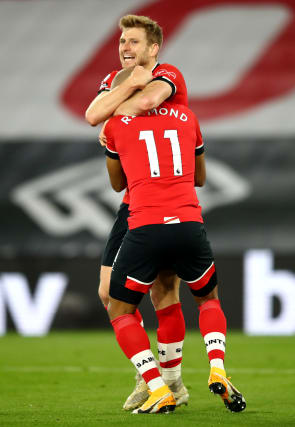 Southampton moved top of the Premier League for the first time in their history after beating Newcastle 2-0 at St Mary’s.

A seventh-minute strike from Che Adams gave the home side an early lead and they wrapped up victory in the 82nd minute through Stuart Armstrong.

Ralph Hasenhuttl’s men dominated possession and chances as they sealed a comfortable win that saw them replace Liverpool at the top of the table ahead of this weekend’s fixtures.

The Saints last stood at the summit of English football 32 years ago under the management of Chris Nicholl and it marks a remarkable 12 months for the Austrian manager since their 9-0 thrashing by Leicester last October.

Newcastle, who had yet to be beaten away from home in the Premier League this season and headed into the game on the south coast in good form, having beaten Everton 2-1 in their previous fixture, but often lacked control and managed just four shots during the game.

Southampton moved level on 16 points with defending champions Liverpool, but could be overtaken by the Reds, Leicester, Tottenham or Everton if they win at the weekend.

The Saints took the lead with the first real chance of the game.

Karl Darlow was forced into a diving save to deny Adams with a curled strike from the edge of the area, but Newcastle were unable to clear the danger.

Theo Walcott won the ball back on the right after Miguel Almiron failed to clear his lines before playing in Adams, who fired it past the Newcastle goalkeeper to give his side the advantage.

Adams had another chance five minutes later when he controlled the ball in the box before taking a shot, but his effort lacked power and Darlow was able to gather.

After the goal, Newcastle tried to get a foothold in the game. Their first real chance came in the 22nd minute, but Sean Longstaff’s header from Jamal Lewis’ cross was straight at goalkeeper Alex McCarthy.

Walcott had an opportunity to double his side’s lead just before the half-time break but his curled shot was just wide of the target.

At the start of the second half, Jamaal Lascelles denied Southampton a second with a clearance off the line from Jan Bednarek’s effort, before Darlow was forced into a fingertip save to force Oriol Romeu’s drive from distance onto the woodwork and over.

Southampton had a penalty shout after Walcott was brought down by Lascelles in the area, but the challenge was not reviewed by VAR.

The home side were eventually rewarded for their dominance in the 82nd minute when they made it 2-0. Armstrong capitalised on a mis-timed pass from Sean Longstaff before cutting in and driving the ball past Darlow.

Joelinton almost pulled one back for the visitors, forcing McCarthy into a diving save to push the substitute’s header over the bar, but Southampton held on to secure all three points and move to the top of the league.