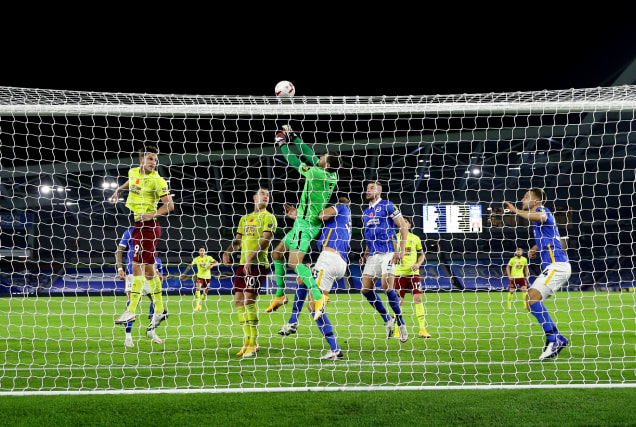 Sean Dyche is confident goal-shy Burnley have sufficient firepower to stay in the Premier League after drawing another blank in the goalless draw at Brighton.

The struggling Clarets climbed off the bottom of the table – a point above Sheffield United – but remain winless following an uneventful stalemate at the Amex Stadium.

Dyche’s men mustered just a single attempt on target in Sussex and have now failed to find the net in four successive top-flight games.

While the Clarets boss admits improvement is required in front of goal, he feels his team are producing performances to build on and believes fortunes can quickly change.

“Our history strongly suggests that we have players who can score goals in the Premier League and sometimes you go through little spells when it’s not working for you and suddenly you pop out of them.

“You can’t always define those moments but we know that we’re short of goals at the moment, we’re certainly not hiding from that.

“The thing I know about football is you’re never as far as away as you think and I don’t think we are. But we have to keep adding to these performances to win games.”

Seagulls top scorer Neal Maupay, who was recalled after missing last weekend’s defeat at Tottenham due to a disciplinary issue, also had a couple of sights of goal but was unable to force a winner.

Albion sit three points above the relegation zone having gone eight matches without a top-flight victory on home soil.

Brighton head coach Graham Potter was disappointed not to take all three points and felt a breakthrough goal was the only thing missing from his team’s display.

“It was really positive, I am really happy with a lot of the performance,” said Potter.

“We restricted the opponent to not too much at all and had some opportunities ourselves. We pushed and pushed, tried everything, gave everything, good intent.

“The only thing missing was the goal but I can’t fault the players in terms of what they gave and the effort.

“I am disappointed with just one point but that’s football, we have to stick together, move forward and look forward to the next one.

“Over the course of the game we probably did enough to score but that’s how it is sometimes.”