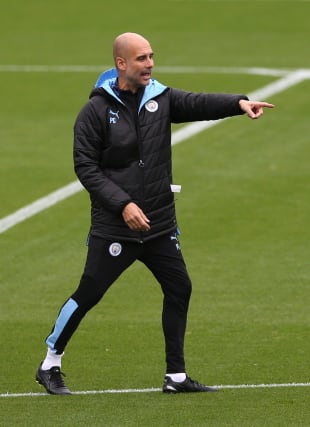 Pep Guardiola accepts his Manchester City side will have to survive some difficult moments to have any chance of beating Liverpool this weekend.

City host the champions and current Premier League leaders at the Etihad Stadium on Sunday.

The two sides are considered the main rivals for this season’s title and Guardiola claims it will be good for his team to measure themselves against Jurgen Klopp’s men this early in the season.

Guardiola said: “When you play against teams like Liverpool you always have moments where you have to suffer. We know it. We have to do it and try to play to our strengths as much as possible.

“We know each other quite well. We have played many times. I don’t expect a game of 90 minutes where we will be there, or where they will be there for 90 minutes. There will be ups and downs.

“We have to be stable in the bad moments and, in the good moments, take our good chances and be clinical.

“It’s always nice to play against the strongest teams and last year they were stronger. They are an exceptional team, they have had the same manager for a long time and it is nice to face him all the time to improve our level.”

Defeat would leave City eight points behind Liverpool but, while not disputing the game’s importance, Guardiola feels it is too early in the campaign to draw conclusions, whatever the outcome.

Guardiola, whose side would still have a game in hand on Liverpool in any case, made a topical reference to make his point.

He said: “Of course it is important, we cannot deny it, but it is just the seventh game. Like presidential elections, all the votes must be counted, so there are a lot of points to play for.

“We know we have to do a good performance to beat them, we won and lost in the past. We are going to do our best to beat them.”

Guardiola does not expect Liverpool to dominate the title race as they did last season.

He said: “They are the biggest favourite but I think, with what happened with the pandemic, the situation is a bit different. I see other teams strong.

“I think this season there will be a lot of teams there. The last five to 10 games will be important to arrive there to fight for the title.

“Hopefully we can be there and arrive at the end with a chance to fight for the title.”

City’s hopes of having record goalscorer Sergio Aguero back in on Sunday have been dashed.

The striker had been given an outside chance of featuring after three games out with a hamstring injury but will instead target a return against Tottenham after the international break.

Aguero, 32, has ensured a frustrating start to the season. The Argentinian missed the end of the last campaign after undergoing knee surgery in June and has featured just three times this term.

“He’s not ready, not yet,” Guardiola said.