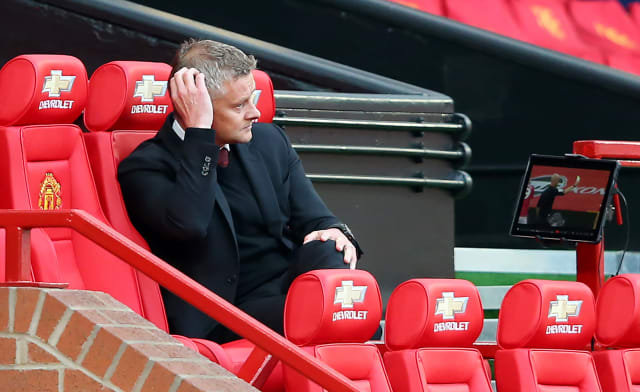 Anything short of victory over Everton on Saturday will mean Manchester United have experienced their worst start to a Premier League season at the seven-game mark.

With seven points from their first six matches – and nine goals scored after drawing successive blanks againt Chelsea and Arsenal – the Red Devils lie 15th in the table going into the weekend’s fixtures.

Their previous low bar was last season, where they hauled in nine points from the available 21. Here, PA looks at some of their previous sluggish starts.

Solskjaer’s first full season in charge started with a wave of optimism as a brace from Marcus Rashford helped put Chelsea to the sword 4-0 on the opening day. Yet fans had to wait over a month to see another win and there were losses to Crystal Palace and West Ham to digest alongside three draws. Bruno Fernandes’ arrival lifted the team and, after reaching the coronavirus break in fifth, they successfully landed Champions League football as the campaign concluded.

After Sir Alex Ferguson’s retirement, David Moyes began with a 4-1 win at Swansea but things quickly went sour, with a 4-1 loss to rivals Manchester City in the fifth league game followed by a further setback against West Brom. Moyes, having signed a six-year contract, was gone before the season was out as United wound up with their record low finish and points total in the Premier League era.

Jose Mourinho’s third season at the club began with victory over Leicester but back-to-back defeats at the hands of Brighton and Tottenham soon dampened enthusiasm at Old Trafford, with West Ham inflicting further damage at the end of September. An increasingly embattled Mourinho was sacked a week before Christmas with the side sixth, albeit closer to the relegation zone than the summit. Solskjaer arrived as a caretaker, won a permanent deal after a string of strong results but ended with another slump in form.

Defeats to Bolton and Leeds and draws with Chelsea and Sunderland made for a difficult start but Ferguson’s men recovered to win the league after finishing unbeaten in their last 18 games, including 15 wins. They did not hit the top spot for the first time until their 33rd game of the season, a 6-2 win at Newcastle.

Louis van Gaal proved to be no quick fix to United’s post-Ferguson ills, celebrating just one win in a friendly-looking opening five games against Swansea, Sunderland, Burnley, QPR and Leicester. They beat West Ham and Everton but failed to win in their next three and could only limp into the Champions League places.