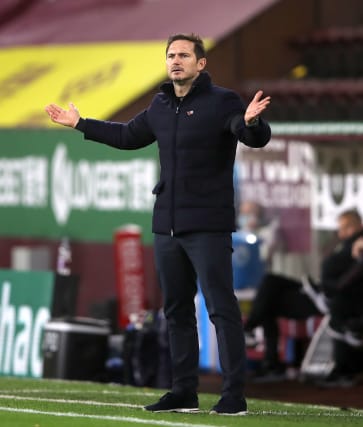 Frank Lampard has called on football’s bosses to sharpen up video reviews and standardise handball rules across all competitions.

Lampard revealed that referees’ bosses told Chelsea the Blues should have been awarded a penalty for Harry Maguire’s challenge on Cesar Azpilicueta in the goalless Premier League draw at Manchester United.

Chelsea asked Professional Game Match Officials (PGMOL) to review the Blues failing to receive a penalty for Maguire’s challenge, and Lampard revealed the response was that a spot-kick should have been awarded.

Chelsea lost out at Old Trafford but benefited on Wednesday when Dalbert was sent off for a second booking for handball, conceding a second penalty, as the Blues eased past Rennes 3-0 in the Champions League.

The Champions League continues to use the controversial handball rule that has since been revised in the Premier League – leading to Chelsea receiving a penalty that would not have been given in domestic action.

All this confusion has left Blues manager Lampard calling for greater clarity, and a more streamlined approach.

“The one against Manchester United recently for us, that goes against us, we’ve inquired about the reasons for that decision,” said Lampard.

“We’ve been told that it was a penalty; VAR didn’t take much time to look at it. And that goes against us and possibly, probably, lost us two points on the day.

“So with VAR and the subtle differences we’ve got to make sure that VAR is there for a reason, to get decisions right, with retrospect and time, for everyone on an even playing field.

“That was just one that went against us there, and in midweek certainly we had one that helped us, but had a big impact on the game.

“I think the handball rule we adjusted in the Premier League, not being adjusted in the Champions League and from FIFA it seems, it’s a rule that I think universally is disliked by anyone who plays, watches or supports football.

“I can’t back it in midweek even though it gives us a penalty and a red card, because it just doesn’t feel right.

“I think that has to be looked at in Europe in terms of how we move forward.

“That one goes in our favour, and I think it’s important to be open and honest about that, I mentioned it after the game.”