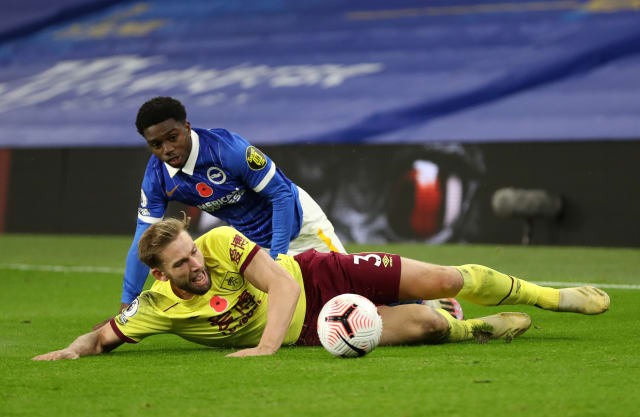 Burnley climbed off the bottom of the Premier League table but remain winless following a goalless draw which extended Brighton’s lengthy wait for a home victory.

Brighton, meanwhile, sit three points above the relegation zone having gone eight matches without a top-flight victory on home soil.

In addition to starting Welbeck, Seagulls boss Graham Potter recalled top scorer Neal Maupay following a disciplinary issue but his side could not force a breakthrough and have now won just one of 13 top-flight games at the Amex Stadium in 2020.

Burnley had significant team news of their own and were able to welcome back captain Bee Mee from a thigh problem for his first appearance since late June.

The Clarets defender contributed to only a second clean sheet of the campaign but almost endured a nightmare start.

His slip with around 30 seconds on the clock released Welbeck into the box and, after the ball was cutback, onrushing wing-back Tariq Lamptey thumped over.

Albion goalkeeper Mat Ryan, who along with Maupay was a surprise omission at Tottenham last weekend, was spared embarrassment at the other end just three minutes later when he was caught out by Lowton’s overhit cross from the right and the ball came back off the bar.

In a game of relatively limited chances, Brighton offered the greater attacking threat all evening.

Welbeck, signed as a free agent last month following his departure from relegated Watford, had two fine opportunities to make an instant impact before the break.

The former England international looked certain to score in the 34th minute but, having been slipped in by Adam Lallana, his low strike was repelled by the legs of Nick Pope, before the Clarets keeper later raced off his line to smother the ball at his feet.

Albion continued to have the better of the play in the second period.

Adam Webster looped a header onto the roof of Burnley’s goal, while Frenchman Maupay fired straight at Pope from the edge of the box when he could have played in Welbeck.

Burnley, who failed to muster an attempt on target in the second half, have never lost a Premier League game at the Amex Stadium and resolutely dug in to extend that record.

The Clarets’ backline produced a series of crucial blocks as the half wore on, including full-back Charlie Taylor superbly denying Lamptey’s close-range effort.

Brighton threw on Iran forward Alireza Jahanbakhsh and Republic of Ireland striker Aaron Connolly in an attempt to find a late winner.

However, neither player was able to make a telling impact during the uneventful final stages, leaving head coach Potter to ponder another home fixture without success.