5 Premier League talking points ahead of the weekend’s action 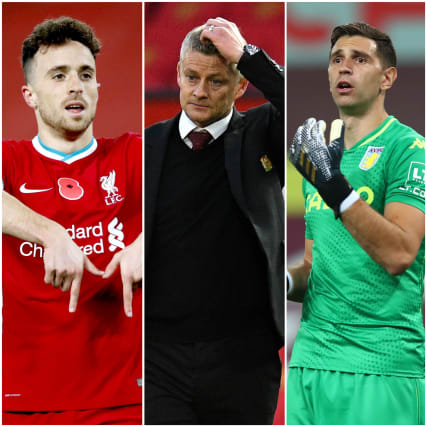 With an international break looming the Premier League has thrown up another interesting weekend of fixtures with plenty at stake.

Reigning champions Liverpool host 2019 winners Manchester City while other results could see pressure continue to grow on a number of managers.

Here, the PA news agency takes a look at some of the key talking points heading into the weekend’s games.

Klopp to stand Firm with Roberto or use Jota as his plotter against City?

Liverpool host Manchester City on Sunday afternoon as the two best sides in the league for the past three years do battle at Anfield.

A win for Jurgen Klopp’s Reds would see them move eight points clear of the visitors at such an early stage of the campaign.

The main question mark over team selection is if Klopp sticks with his famed front three of Sadio Mane, Mohamed Salah and Roberto Firmino – or whether the latter, with just one goal all season, is replaced by in-form Diogo Jota, who has scored six in his last four matches

Will Ole come unstuck against the Toffees?

Ole Gunnar Solskjaer saw his Manchester United side lose 2-1 to Champions League newcomers Istanbul Basaksehir on Wednesday night as speculation over his future continues to mount.

Former Tottenham boss Mauricio Pochettino continues to be linked with the post, with United travelling to Everton in the bottom-half of the table, some six points behind their hosts.

Everton will be able to recall fit-again James Rodriguez to their side but all eyes will be on Solskjaer’s selection and whether or not he can secure a win to stave off the critics.

200 and counting as Kane takes aim at Baggies

Harry Kane moved onto 200 Tottenham goals with a header in Thursday’s Europa League win over Ludogorets.

The England skipper has been in scintillating form so far this season, already being directly involved in 22 goals in just 13 appearances for Spurs – scoring 12 and assisting a further 10.

Struggling West Brom are his next target as he looks to fire Jose Mourinho’s side closer to the top of the table while heaping more misery on the Baggies and boss Slaven Bilic.

Fulham secured their first Premier League win of the season by seeing off Bilic’s men at Craven Cottage last week.

The 2-0 victory was enough to move Scott Parker’s side out of the relegation zone heading into this weekend’s fixtures.

Now Parker will be looking to cause an upset in a London derby against former club West Ham as Fulham head to the London Stadium with renewed vigour and belief.

Martinez aiming to show that Arsenal got Bernd

Emiliano Martinez starred in goal for Arsenal towards the end of last season as he was finally given a run of games following an injury to Bernd Leno.

The Argentinian spent a decade with the Gunners, out on loan on six different occasions, but was brilliant for Mikel Arteta as Arsenal secured a record 14th FA Cup success.

It was a shock, therefore, when he left for Aston Villa in the summer as Arteta opted to reinstall Leno as his first-choice and now Martinez will be keen to show that was the wrong call when Dean Smith’s side travel to the Emirates Stadium on Sunday.