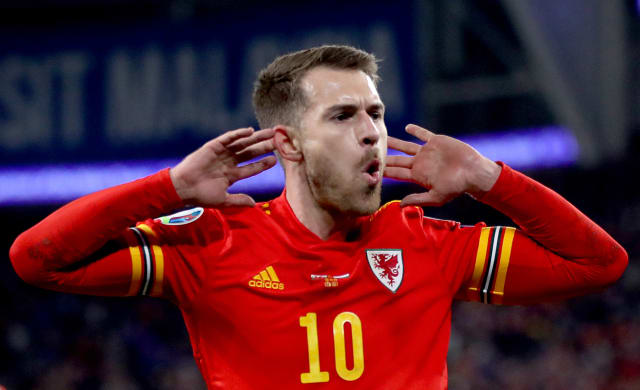 Ramsey limped off in the early stages of Juventus’ 4-1 Champions League win away to Ferencvaros on Wednesday and an examination has revealed a thigh injury which will be asssessed again in 10 days’ time.

The 29-year-old has started only two Wales games since the start of 2019 after being plagued by various injuries.

Ramsey will now miss the friendly against the United States in Swansea on November 12, as well as the Nations League games in Cardiff against the Republic of Ireland on November 15 and Finland three days later.

Juventus revealed the extent of the injury on their website on Thursday afternoon, saying: “Aaron Ramsey, who was substituted off during last night’s match, was subjected to examinations at J Medical this morning, which revealed a low-grade injury to the rectus femoris muscle of the right thigh. In 10 days it will be re-evaluated.”

The Football Association of Wales swiftly confirmed Ramsey’s withdrawal from the squad, tweeting: “Following a scan giving confirmation of his injury, Aaron Ramsey has withdrawn from the squad.”

There was good news earlier with Gareth Bale returning to a Wales squad selected by absent manager Ryan Giggs before his arrest on suspicion of assaulting a woman on Sunday night.

Skipper Bale missed Wales’ October games against England, the Republic and Bulgaria with a knee injury which delayed his Tottenham debut following his season-long loan move from Real Madrid.

Giggs will be missing from the Wales’ camp after being arrested and later bailed over an alleged row with “on-off girlfriend” Kate Greville at his Manchester home on Sunday, The Sun newspaper reported.

The 46-year-old’s assistant Robert Page will be in charge for the three games and will be supported by Arsenal coach Albert Stuivenberg.

The FAW took the unusual step on Thursday of announcing the squad for the upcoming games via their social media platforms rather than hold a press conference on Zoom.

Wales, who are top of Nations League Group B after three wins and a draw, are without first-choice goalkeeper Wayne Hennessey and his deputy Adam Davies through injury.

Crystal Palace goalkeeper Hennessey, Wales’ second most capped player with 94 appearances, has started 21 of the 24 games that Giggs has had since taking over in January 2018.

Giggs has recalled Dunfermline’s Owain Fon Williams, who was part of the squad which reached the semi-final of Euro 2016 under Chris Coleman, and Newport’s Tom King.

Defenders Tom Lockyer and James Lawrence are also recalled and Newport midfielder Josh Sheehan wins a first senior call-up after being preferred to Cardiff’s Will Vaulks.

Tom Lawrence features in a Wales squad for the first time this year after summer surgery.

Centre-back Cabango missed Swansea’s 1-1 draw at Brentford on Tuesday after suffering a hamstring injury in the warm-up.

Norrington-Davies, who won his first cap in the 1-0 Nations League victory in Bulgaria last month, sat out Luton’s midweek win at Rotherham with a hamstring concern.”