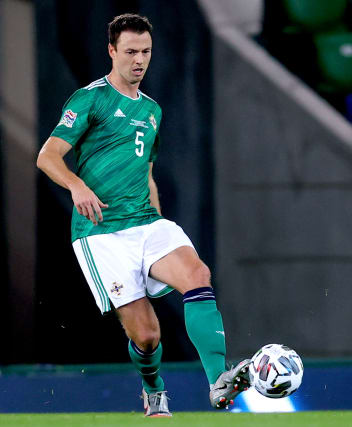 Northern Ireland manager Ian Baraclough has played down injury concerns over Jonny Evans ahead of next week’s Euro 2020 qualifying play-off final against Slovakia.

Evans has made only five club appearances this season and has missed Leicester’s last two matches with a back injury suffered against Arsenal on October 25.

The 32-year-old was named in Baraclough’s 26-strong squad to face Slovakia and for upcoming Nations League games with Austria and Romania.

Baraclough said: “He’s had a sore back and I don’t think Leicester want to risk him, but he’s telling me his recovery is getting better all the time.

“He’s still got a bit of soreness and a bit of bruising but hopefully he’ll be fit for us. He’s doing light training at Leicester and could come into contention for the weekend.”

Baraclough has brought three new faces into his squad, with Aberdeen winger Matthew Kennedy back from injury, while Ethan Galbraith and goalkeeper Conor Hazard both step up from the under-21s.

They replace Jordan Jones, Joel Cooper and the injured Trevor Carson, with Jones not considered after breaching Covid-19 protocols with Rangers.

“It’s well documented what’s happened to Jordan,” Baraclough said. “He’s made a mistake and he’s paying for that because he’s no longer with Rangers for a couple of weeks and we’ve ruled him out as well.

“Jordan made a mistake, he made a wrong decision and I think he’ll be sat at home having to watch on TV and ruing what he’s done.

“But it’s also our responsibility to support him as well. I’m not going to ostracise him forever and a day. He’ll be a good player for Northern Ireland, but he’s certainly got to review what he’s done and I know he’s remorseful for it.”

Hazard, 22, replaces Carson, who is expected to be out until the new year after suffering a knee injury last month, while the 19-year-old Galbraith gets the call a week after signing a new deal at Manchester United.

“They are young players I’ve worked with in the past and I know their potential,” Baraclough said of the young duo.

“Conor has waited for his chance and has consistently performed with the under-21s.

“Ethan, over the last six months we’ve seen maturity in his play and the way he goes about his work. He’s excelled with the under-21s and he’s a different type of player to anyone we’ve got in the senior squad.

“Not to put too much pressure on him, but he’s our little (Andres) Iniesta or Xavi, someone who can get on the ball and manipulate the ball and find positive passes. Hopefully it’s the start of a long career for him.”

Northern Ireland will face Slovakia at Windsor Park next Thursday night before heading to Vienna to play Austria on November 15, returning to Belfast for the match with Romania on November 18.