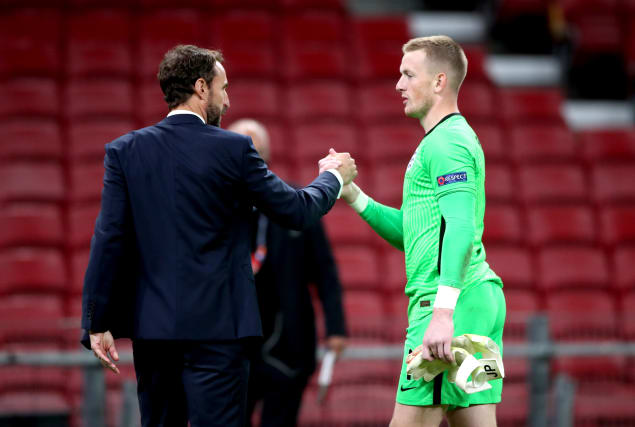 England boss Gareth Southgate has revealed he called Jordan Pickford in his hour of need as he backed the Everton goalkeeper as his firm first choice.

Pickford was heavily criticised for a challenge on Virgil Van Dijk during the recent Merseyside derby that left the Liverpool defender sidelined for months with a serious knee injury.

The 26-year-old escaped any punishment as the incident occurred following an offside call, with the video assistant referee also deciding against recommending a red card.

Pickford has since faced stern disapproval on social media and from a number of former professionals and was rested for Everton’s defeat at Newcastle on Sunday.

Toffees manager Carlo Ancelotti insists he will recall Pickford against Manchester United on Saturday, while Southgate has spoken to the former Sunderland man.

“I have spoken with Jordan in the last few weeks but Carlo would be more aware of what he is seeing on the training pitch every day and how he felt,” Southgate said.

“It was after the Liverpool game. I was just checking in. I recognised that it had been a very high-profile situation and there had been a lot of collateral fallout in a very public way.

“So I just felt it would be an appropriate call to make to see how he was and if I could help him in any way really.”

Pickford’s position as England’s bonafide number one has been questioned over the past months, ever since his stellar performances during the run to the World Cup semi-finals in 2018.

Southgate has also called up Manchester United’s Dean Henderson – who has played just three times for the Red Devils this season – and Nick Pope, whose form at Burnley has suffered of late.

“Well, when people say I have been loyal to him he has deserved that,” he said.

“His performances have been excellent for us and so that has not been a difficult decision for me.

“We have some competition for places but I would have to say that there is nobody who I think is challenging seriously at the moment to push him out of that position.

“His ability with the feet has been an important part of how we have tried to play for quite an important period of time as well so, I think he is also benefiting from as experienced and successful a manager as you can have at club level.

“He will deal with everything in a very calm manner and a very measured way so, even over the years he has taken an opportunity to rest his goalkeepers and he did that last week, but within 15 minutes of that decision you knew Jordan would be playing this weekend so those small things help settle the decision down.

“Of course this has been a very difficult period for him in terms of the spotlight on that particular challenge and because of the profile of the player involved in it as well but it is disappointing to see a player like that miss football.

“I understand the passion which happens when there is a local derby and it is not for me to get involved in what happens between sets of supporters and the rivalry.

“Of course, any abuse and threatening behaviour to anybody – we are seeing a lot of examples of this in various guises on social media and I think that is a concern for everybody really.”