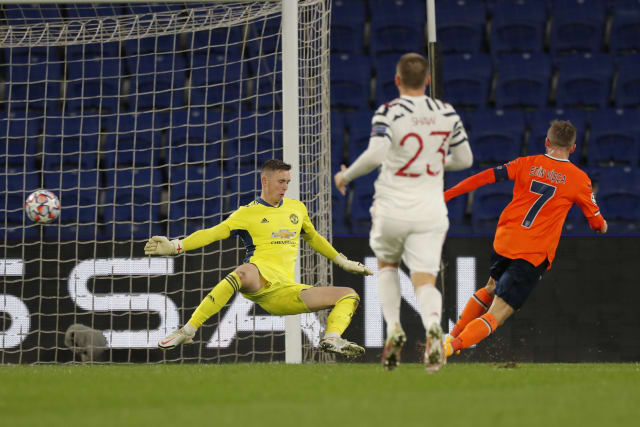 Ole Gunnar Solskjaer’s side had been enjoying a European escape from their Premier League problems, having followed up victory at Paris St Germain in their Group H opener with a five-star performance against RB Leipzig.

But United would succumb to defeat at unfancied Istanbul Basaksehir on Wednesday, with former Premier League striker Ba and skipper Edin Visca scoring in a 2-1 win – their first-ever Champions League group stage victory.

Anthony Martial had reduced the deficit just before half-time, but this season’s 100 per cent away record came to an end for the lacklustre Red Devils to intensify scrutiny on Solskjaer and his side.

The manner in which the well-drilled Turkish champions defended contrasted markedly with the schoolboy efforts that saw United punished by Ba in the 13th minute.

Inexplicably poor awareness and organisation allowed the unmarshalled ex-Newcastle, Chelsea and West Ham striker to collect a long ball and run from the halfway line to score.

United’s backline was again caught out as Baykus captain Visca struck just before half-time, with Martial quickly heading home to give the visitors hope.

Yet despite introducing the likes of Edinson Cavani, Paul Pogba and Mason Greenwood, Solskjaer’s side could not find a leveller on a night that ended with Alexandru Epureanu hacking off the line.

Few could have foreseen this result in Istanbul, where Bruno Fernandes tried an audacious early volley from a diagonal Harry Maguire pass before Luke Shaw’s fizzing cross-shot just whizzed wide.

But that early confidence came with a dollop of complacency, with Visca smashing over a warning shot from the edge of the box before Ba punished some dim defending.

With players waiting in the box for a cross following a short corner, United’s poor defensive structure was exploited by a ball over the top to the unmarked ex-Premier League striker.

Nemanja Matic was nowhere near Ba, who controlled the ball at the halfway line and raced forward to beat European debutant Dean Henderson with a cool finish.

The handful of those in the ground went wild and made their feelings known when Ba was denied going through again in the 20th minute by Axel Tuanzebe, who only received a booking for the challenge.

United attempted to remain patient when they could have panicked, but they were prosaic in possession and caught out again in the 40th minute.

Deniz Turuc robbed Juan Mata of possession and darted down the left flank, sending over a cross that Ba smartly stepped over for unopposed Visca to thump past Henderson.

United were rocked on their heels but managed to reduce the deficit with two minutes of the first half remaining. Shaw made space to swing in a fine cross from the left that Martial did well to steer home with a header.

Solskjaer surprisingly brought on Scott McTominay for the booked Tuanzebe at half-time, meaning defensive midfielder Matic dropped back to play at centre-back alongside Maguire.

Basaksehir were penned back as soon as the second half got under way, with Fernandes seeing a free-kick pushed away before another shot was blocked by ex-Liverpool defender Martin Skrtel.

The Portuguese saw an effort deflected wide shortly after, with Solskjaer now having brought Pogba and Cavani off the bench in a bid to add new impetus to the United attack.

Greenwood and Timothy Fosu-Mensah soon followed, but the hosts were not giving an inch.

Former United full-back Rafael was playing brilliantly in a Basaksehir backline that survived a stoppage-time scare.

Maguire headed on from a corner and substitute Mehmet Topal inadvertently directed the ball towards his own goal, only for Epureanu to clear off the line to seal a famous win.