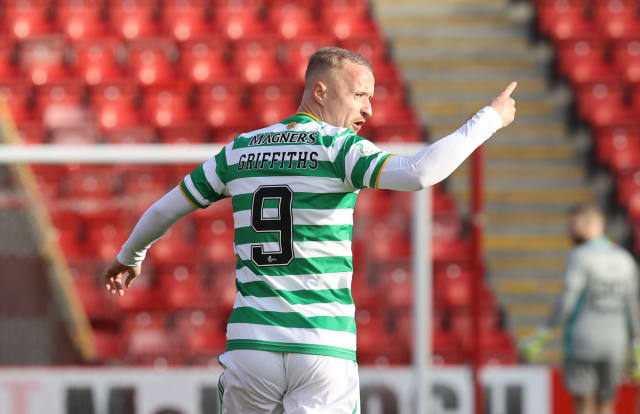 Steve Clarke has warned Leigh Griffiths he will have to be in top shape if he wants the chance to fire Scotland to Euro 2020.

The national team boss has included the Celtic striker in his squad for the first time since taking over as reward for Griffiths’ recent return to scoring form.

A combination of injury and personal troubles have prevented the 30-year-old from adding to his 19 caps since his last appearance against Albania in September 2018.

His last goal for Scotland was against Slovenia 11 months before that but having seen Griffiths find the net against St Johnstone and Aberdeen over the past month, Clarke is convinced he could yet have a major say as his team look to sink Serbia in Belgrade on November 12 and book a place at next summer’s European Championships.

However, the Hampden boss has made it clear Griffiths will have to be at full fitness if he is to get his chance to become a national hero.

Hoops manager Neil Lennon was left fuming when the frontman returned to pre-season training overweight and admitted again after his recent Pittodrie strike he was still not fully up to speed.

Now Clarke has encouraged the striker to sharp up quickly.

“When you look at Leigh over the years he’s always been a goalscorer,” he said. “He’s a dangerous player in the 18-yard box.

“The goal he scored a couple of weeks ago at Aberdeen shows you what he’s all about really.

“Sometimes off the bench you need a goal and with Leigh in the squad he gives us that option.

“Lawrence Shankland gives us it too. The more options I’ve got the better and Leigh is certainly one of those options.

“Every player we’re looking to play, has to be at 100 percent for whatever amount of time they are on the pitch.”