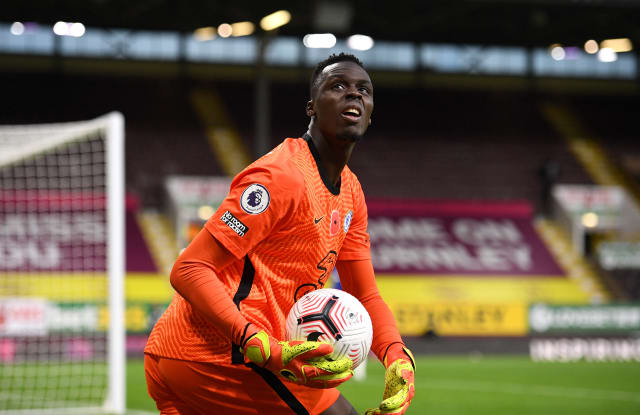 The 28-year-old has kick-started his west London career in style, conceding just once in his first six matches.

Boss Lampard has been impressed by Mendy’s attitude and application, but still believes the new recruit’s best is yet to come.

“I think what he’s shown so far has been very complete,” said Lampard.

“Those clean sheets have shown big parts of his game; he’s made saves in moments in games that have certainly helped us, where if the goal had gone in the games could have gone another way.

“Against Manchester United, particularly in the first half, his save from Marcus Rashford with his feet was a really top-class save.

“He’s given off a sense of calm in his distribution and coming for crosses, and things that you just want from your goalkeepers. And he’s done that, and I’m sure he’ll improve.

“It’s early days for him at the club as he’s still settling in to a degree.

“But while I don’t want to play this down I don’t want to get too ahead of ourselves. It’s been a really good start for him, he’s very confident and he’s shown great qualities so far.

“I think there is going to be a lot more to come, and with his attitude which is key. I’ve seen how he wants to work and how he wants to be, and the humility in him, I think he can go much further, in many departments.”

Chelsea will be looking to extend their unbeaten start to Group E against Rennes, following their goalless draw with Sevilla and 4-0 romp in Krasnodar.

Lampard hailed Mendy for living up to the billing that he had received when Chelsea were doing their due diligence ahead of sealing the transfer.

“When we were in to look to sign Edouard, we made the inquiries, Petr Cech was heavily involved which is pretty common knowledge,” said Lampard.

“All the feedback was that he had a very strong personality in the dressing room. And everything that I heard, he’s been that.

“He’s very low maintenance, he works hard, wants to work more, and he’s eager to engage with team-mates and myself, he has a smile on his face and has played well.