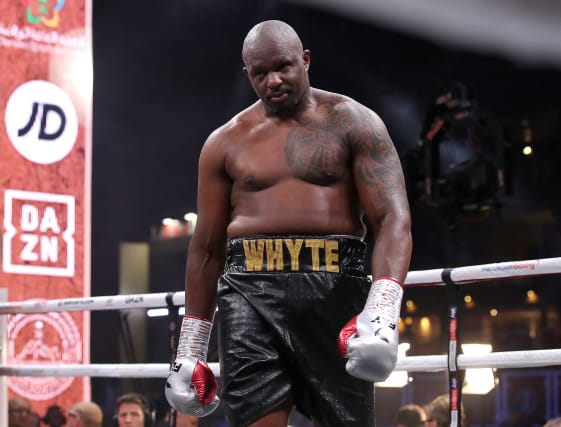 Dillian Whyte is being lined up to face Tyson Fury or Dereck Chisora after his scheduled rematch with Alexander Povetkin fell through due to the Russian testing positive for coronavirus.

Whyte’s hopes of a world title shot were blown in August when he was knocked out during the fifth round despite dominating the fight, and the pair had been scheduled to meet again on November 21 at Wembley Arena.

Promoter Eddie Hearn said Whyte is now likely to wait until the new year unless he can land a short-notice showdown with either Fury or Chisora, whom he has fought twice before.

Hearn said on Instagram: “Dillian would love to fight Tyson Fury on December 5, so if there is an opportunity to do it, we would love to do it.

“David Haye (Chisora’s manager) has just called to say Derek would love to fight the trilogy, so we’ll have to see what happens. We might just wait for January 30 or, if we can find a massive fight for Dillian, we’re ready to go as well.”

Fury, for whose WBC title Whyte was the mandatory challenger before his defeat to Povetkin, has announced plans to return to fight in London in December but no opponent has been named.

Meanwhile Chisora was beaten on points by Ukraine’s Oleksandr Usyk at Wembley Arena on Saturday but emerged relatively unscathed and has indicated he would be ready to step in for a third meeting.

Hearn wrote on Twitter: “Unfortunately we got the news today that Alexander Povetkin is in hospital after testing positive for Covid-19.

“The fight will now be rescheduled to a target date of Jan 30. An announcement on our Nov 21 show will be made shortly.”

The first contest was staged as part of Matchroom’s Fight Camp, which was held at its headquarters in Brentwood, Essex.

Soon after the postponement, Hearn tweeted “Dillian Whyte v Tyson Fury anyone?” – but the reality is boxing politics are likely to rule out the prospective contest as a realistic short-term option.