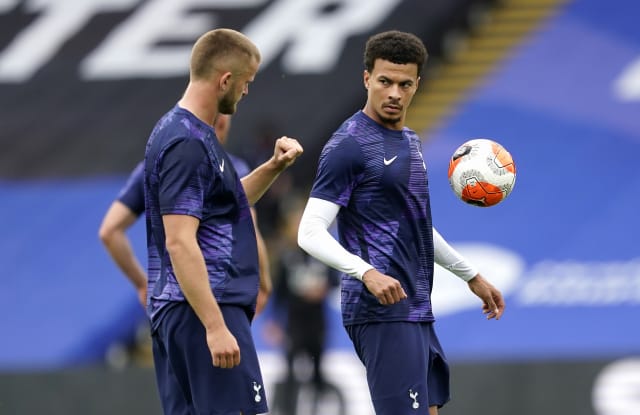 Eric Dier says his friend Dele Alli’s future at Tottenham is still in his own hands.

Alli’s situation at Spurs looks bleak having fallen out of favour under boss Jose Mourinho this season and he was linked with a move away from the club during the recent transfer window.

He has made just three starts so far and has not made it past half-time on two of them as Mourinho takes a ruthless stance.

It is a huge fall from grace for the 24-year-old, who was one of Europe’s best young players when he burst into Tottenham’s side, but Dier, who is big mates with Alli, is backing him to recover.

“It’s really up to him to put in the work, the effort, the commitment and I’m sure he will do that.

“That’s who he is, he’s always had that drive. It’s up to him, it’s in his hands and it’s in all of our hands.

Alli’s plight has not been helped by Spurs making a positive start to the season, where they sit in second place in the Premier League after seven games.

They will go top if they beat West Brom next Sunday and have been tipped to make a title challenge, but Dier is not looking too far ahead.

“We’re happy with where we are, we could be happier,” he said. “If you look at some games – the Newcastle game with the penalty, again, very difficult to understand!

“The Everton game wasn’t acceptable and then the West Ham game the same, really frustrating to be 3-0 up (and draw 3-3).

“It was really important for us to get off the mark at home, get the win and obviously we’ve improved massively away from home which was really our downfall last season.

“It’s great to be up and running with a win at home and we’ll just look to keep working hard, keep pushing forward.

“There’s not much more I can say because we’re really focused on ourselves and we’re focused on Thursday now, the Europa League game.

“The work with the manager has been great because you know where you stand every game and he wants to win it and the focus is completely on that. That’s his focus, no matter what the competition is. That’s always his focus and our focus.

“Anything other than that is for others to discuss. I guess we’re just really focused in the moment.”