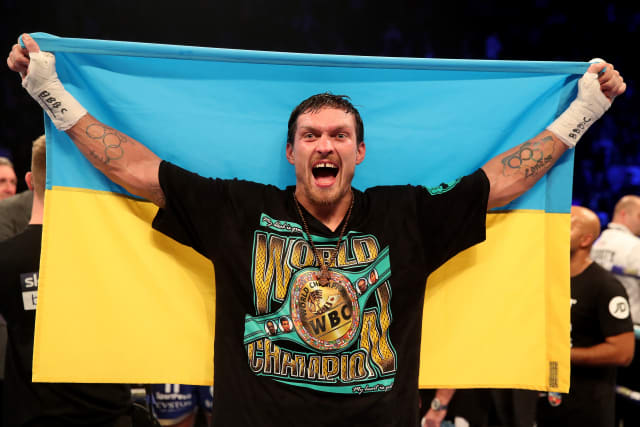 Oleksandr Usyk took a step closer towards fighting for a world title next year while Deontay Wilder accused Tyson Fury of trying to renege on a third meeting between the pair in an eventful weekend in the heavyweight division.

Usyk strengthened his position as the mandatory challenger to the WBO title held by Anthony Joshua by outpointing Dereck Chisora in an efficient if unspectacular affair at Wembley’s SSE Arena on Saturday night.

The Ukrainian should therefore fight for a title in 2021 but his chance may not necessarily come against Joshua and, here, the PA news agency explains why in a look at the state of play in boxing’s blue riband weight class.

Is Usyk a major player in the division now?

Having reigned as undisputed cruiserweight champion, Usyk has stepped up in search of bigger game and greater challenges. He got that on Saturday night against Chisora, who made life difficult early on before the unbeaten southpaw showed his craftsmanship to earn a unanimous decision victory. He proved he could take a punch in his first serious test at the weight while his hand speed and footwork are still spectacular but questions remain over whether Usyk has the power to trouble the division’s elite fighters. He would perhaps be better served taking another one or two tune-ups to adjust to the top bracket but signalled his intentions by calling out Joshua.

So, Joshua has to face Usyk soon?

Usyk being WBO mandatory means he should be Joshua’s next fight if the Briton takes care of Kubrat Pulev next month. That is a bout that Joshua’s promoter Eddie Hearn said could be switched from its current location of the O2 Arena to overseas after a second lockdown in England all but nixed the hope of fans returning to sporting events anytime soon. However, if the IBF, WBA and WBO titlist comes through the Pulev test, he has an agreement “in principle” to take on Fury, the WBC champion, twice next year in eagerly-anticipated showdowns that would ostensibly determine the undisputed champion of the division.

Where would this leave Usyk, then?

Usyk warned Joshua: “I’m coming for you” and has indicated he would not be willing to step aside to allow the all-British world title clash to go ahead with the four major world belts on the line. In this scenario, it is likely Joshua, assuming he defeats Pulev, has two choices: fight Usyk or vacate the WBO belt in order to pursue Fury.

What is Fury’s situation?

After a controversial draw against Wilder in December 2018, Fury made sure there was no doubt in the rematch with a brutal seventh-round stoppage of the American in February. It was widely assumed they would complete the trilogy next month but Fury said he had “moved on” from that prospect after claiming Wilder and his team sought to push back the contest to next year. Fury instead said he would have a homecoming fight in London on December 5, with either former European champion Agit Kabayel or Carlos Takam rumoured to be top of the wishlist.

How has Wilder reacted to this?

Wilder, who had surgery on his left bicep after losing to Fury, has largely been tight-lipped after the first defeat of his professional career. However, he ended his silence on Saturday evening with an explosive post on his social channels telling Fury to be “be a man” and honour a contractual agreement between the pair, instead of trying to “weasel out” of the fight. Wilder also alleged Fury “put something hard” in his gloves before their last meeting although there is no evidence to support such a statement. In July the Briton released a video of his hands being wrapped when similar claims were made.