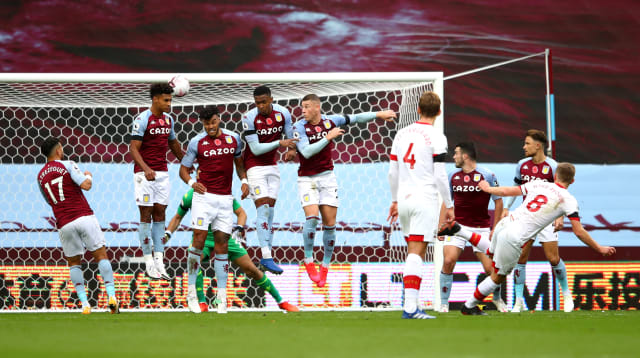 The Saints moved into third in the Premier League despite Villa nearly mounting an improbable comeback.

Ollie Watkins netted a penalty and Jack Grealish added a third in injury time but, while Villa improved, the scoreline flattered the hosts.

They failed to stop Ward-Prowse celebrating his 26th birthday on Sunday with an outstanding performance to earn praise from Hasenhuttl.

He said: “It’s no coincidence he is our captain, he’s our role model for what we stand for – he’s an unbelievable fighter for the team.

“When he gets a chance around the box he is unbelievable.

“I am happy for him to have scored two but also because he supplied an assist for the first goal and for the one disallowed by VAR.

“On free kicks he is amazing and he is getting better. I am very proud of my team but we have to be committed and organised.

“The first 60 minutes was pleasing but not the last 30 minutes. We stopped doing what we were doing.

“We were four goals up but we stopped doing the things that had got us there against a very strong team.”

Victory came at a price for Saints with Ings, Ryan Bertrand and Jan Bednarek coming off injured.

“Danny hurt his knee but we hope it’s not too bad, it didn’t look good at the time, and Ryan hurt his hamstring,” added Hasenhuttl.

Che Adams had an early goal ruled out by VAR for offside and Theo Walcott hit the bar but Vestergaard’s towering header from Ward-Prowse’s delivery gave Southampton the opener after 20 minutes.

Skipper Ward-Prowse made it 2-0 after 33 minutes when his excellent free kick found the top corner from 25 yards.

He repeated the trick in first-half injury time from the edge of the box and Ings added a classy fourth after 58 minutes, belting in via the underside of the bar.

Alex McCarthy saved from Grealish, Trezeguet and Mings before being beaten by Watkins’ injury-time penalty after Ibrahima Diallo’s foul on Grealish.

The Villa skipper made it 4-3 with virtually the last kick of the game when he found the bottom corner from the edge of the box.

Boss Dean Smith said: “Look at the last two games, it’s been seven goals (conceded) but we’ve been far from porous. Today it was three goals from outside the box and a header from a free kick.

“As good a header as it was we have to defend it better but we’re certainly not porous that’s for sure.

“It didn’t felt like a hammering, they were just quality finishes. It’s a bit of a crazy situation. There are a lot of strange scorelines already.

“The one thing I said to the players was ‘what might have been’. It was a real scrap in the first half, lots of shouting and whistle blowing but unfortunately they have got a specialist in Ward-Prowse.

“They had four shots on target and scored all four. In the second half we found our rhythm and gave them a lot more problems and restricted them getting men around the ball.”