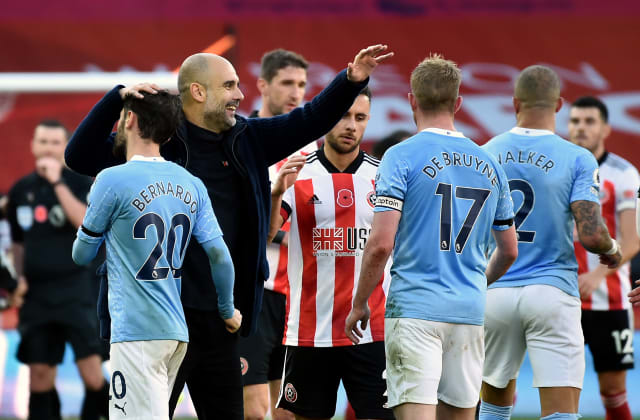 Manchester City boss Pep Guardiola is pleased to see signs that his team are ironing out their early-season defensive problems.

It has been a good week for City, with victory in Marseille putting them in a strong position at the top of their Champions League group while Saturday’s win at Sheffield United moved Guardiola’s side to within striking distance of the top four in the Premier League.

Since shipping five against Leicester at the end of September, City have conceded just three goals in seven games in all competitions, coinciding with Ruben Dias’ arrival from Benfica, and look far more durable with the Portugal international alongside Aymeric Laporte at the heart of the defence.

Guardiola admitted after the 1-0 win at Bramall Lane that his team are “struggling to score goals”, but at the other end of the pitch City seem to look a lot tighter and more organised.

“We are in a better position than last week,” said Guardiola. “Kyle Walker, he was incredible, Ruben Dias, Aymeric Laporte, Joao Cancelo, they are all doing really, really well.

“It is so important for us. We are delighted for what they are doing. This charisma in the back line helps us.

“Two shots (against us) in Marseille and Sheffield only had one clear chance in 90 minutes, so that is so good for us.

“But the reason we concede not one goal is not just them. They are doing really well but we don’t concede because of everyone’s contribution and we are delighted.”

The 3-0 win in Marseille put City top of Group C with two wins from their opening two matches but Guardiola is set to make changes when Olympiakos visit the Etihad Stadium on Tuesday, with the Spaniard already thinking about next weekend’s huge home clash with Premier League champions Liverpool.

“We need to carry it on and there are two games before the international break. If we are able to win against Olympiakos we will be close to securing Champions League qualification and this is the next target,” said the City boss.

“But against Olympiakos I have to think about how many changes to the team because it’s a lot of games – five games in 16 days and no human being can do it.”

Sheffield United boss Chris Wilder defended his side’s approach against City and admitted his team are low on confidence after collecting only one point from their first seven Premier League games.

The Blades had just 35 per cent possession on Saturday and managed just three shots in the entire match.

“If people think we can open up to Manchester City they haven’t got a clue about football,” said Wilder.

“They have world-class players and it will be three, four, five-nil. They are one of the top sides at pressing you in your defensive third so we can’t roll it out from the back. We have to stay compact and do certain things.

“But some of the decisions we are making, I just didn’t get. It’s got to be a belief and a confidence issue.”

Following back-to back defeats to Liverpool and City it gets no easier for the Blades with a trip to Chelsea next weekend.

“One result quickly turns everything and we’ve just got to battle through it together and don’t listen to the noise and nonsense.

“If we are good enough we will come through it, if we are not we know what happens.”