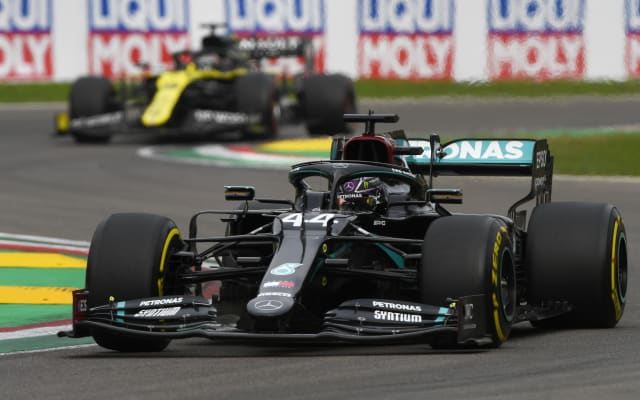 Lewis Hamilton moved to within striking range of a record-equalling seventh world championship after winning the Emilia Romagna Grand Prix.

Hamilton dropped to third at the start but adopted a different strategy to Valtteri Bottas and Red Bull’s Max Verstappen, delivering a number of dazzling laps on older rubber to assume control of the race.

Hamilton stopped 11 laps later than Bottas – and with the slight assistance of a Virtual Safety Car, deployed after Esteban Ocon broke down in his Renault – the world champion comfortably emerged in the lead.

Bottas, hampered by early damage to the floor of his Mercedes, took second, 5.6 seconds behind Hamilton, with Renault’s Daniel Ricciardo third. Verstappen crashed out from second following a right-rear puncture.

Verstappen’s retirement led to a safety car with a dozen laps to go but Hamilton kept his cool at the restart and can now match Michael Schumacher’s all-time tally of world titles by winning in Istanbul on November 15. He is 85 points clear of Bottas with just 104 remaining.

Hamilton’s Mercedes team also wrapped up their seventh consecutive constructors’ championship here in the greatest period of dominance by one team the sport has ever seen.

After he was beaten to pole by team-mate Bottas, Hamilton feared it will be impossible to overtake on Formula One’s return to Imola 14 years after the last grand prix was staged at the Italian venue.

And when the Briton fell back another spot – gobbled up by Verstappen on the race to the opening bend – his bid to win for a 93rd time appeared in grave danger.

Verstappen stopped for tyres on lap 18 with Bottas following him in the next time round. But a determined Hamilton said: “I am going to pick up the pace, man. Don’t stop me.”

At the venue which claimed the life of his childhood hero Ayrton Senna, Hamilton then turned on the style with a hat-trick of fastest laps on ageing rubber to move more than 28 seconds clear of Bottas by the time he stopped.

It was a mesmerising display by the soon-to-be seven-time world champion which laid the foundations for his ninth win of a crushing campaign.

For the past three seasons, Hamilton has sealed the championship with two rounds in his pocket, but he will go one better this year if he takes the flag at the Turkish Grand Prix in a fortnight’s time.

The late safety car following Verstappen’s accident spiced up a turgid affair. Englishman George Russell had been on course to claim the first point of his career, but crashed out while following the safety car.

Russell was attempting to warm up his tyres, but slid off the track and into the wall. Russell was furious with himself, punching his leg as he sat by the side of the road.

Alexander Albon spun out from fifth and looks certain to be dropped by Red Bull at the end of a poor campaign. Daniil Kvyat took fourth ahead of Ferrari’s Charles Leclerc with Sergio Perez sixth.