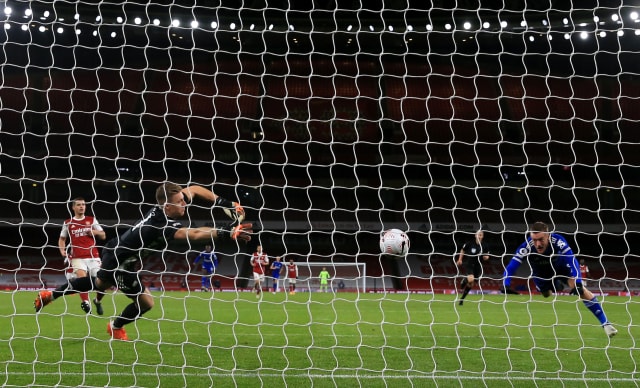 Leicester boss Brendan Rodgers believes Jamie Vardy is still not given the credit he deserves.

The striker, last season’s golden boot winner, has scored seven goals in six games ahead of Monday’s visit to Leeds.

He fired Leicester to an incredible Premier League triumph in 2016, has scored 109 top-flight goals and became an England international after joining from Fleetwood in 2012.

But even after all his achievements, Rodgers feels Vardy would be respected even more if he had a different career pathway.

He said: “He has been a breath of fresh air, a genuine world-class striker. If he didn’t have the path he’s had as a player (from non-league) you would be talking about him much more.

“People say he’s the guy who has come through from non-league and played his way into the Premier League but this is a top-level striker. He still has the hunger.

“From the outside looking in you see his development, you see his finishing, but when you come in to work with him you find out more about the personality.

“He is a bundle of joy in the changing room and loves football. The biggest surprise is tactically how good he is.

“His runs are virtually perfect, how he stays onside, the different types of runs. He is a really special player and I was so lucky to have him here when I got him.”

It has come after surprise defeats to West Ham and Aston Villa and Rodgers feels they could help them in the long run.

He said: “It’s an education to lose as long as you learn from it.

“This season is a real challenge because we want to do well in both competitions (Premier League and Europa League). We worked so hard last year to get into European football so we want to have a real go at it.

“We have been unfortunate like a lot of teams but we are missing some of our top players.

“When we get those back it’ll leave us with a much stronger squad. It is a challenge but it is a challenge we’re embracing. The players understand the situation we’re in.”