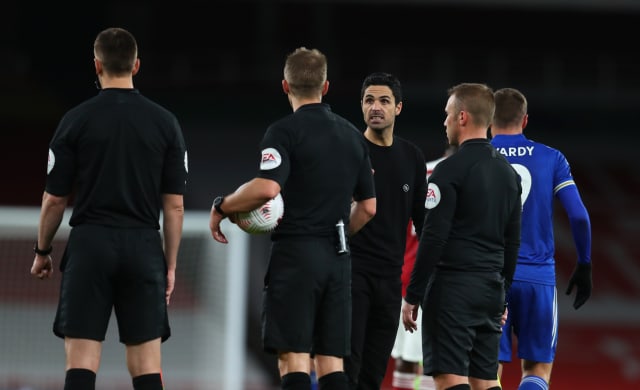 Mikel Arteta believes Leicester’s change of approach last weekend shows his Arsenal side is commanding respect from their opponents.

The Foxes secured a 1-0 win at the Emirates Stadium, their first victory away to Arsenal in 47 years, after Jamie Vardy’s late header followed a gameplan where the visitors sat back and frustrated Arteta’s men.

Manchester United are next up for Arsenal, a trip to Old Trafford presenting them with the chance to end a 28-game winless streak away to their traditional top-six rivals.

Heading there on the back of two Premier League defeats could have left Arteta is a contemplative mood – but instead the Spaniard insists things are slowly coming together since his appointment in December.

“We’ve improved on a lot of things in my opinion and we have all the stats to show that,” he said.

“Our thinking after Leicester, the reason why they did what they did in their game plan, to sit so low against us when they are not normally a team that do that – they’ve been really dominant and play really attractive football – I came to the conclusion that we have the respect from other teams for them to do that.

“Now we have to try to change our strategy a little bit and try to train against more certain blocks that I think are going to happen a bit more often.

“We have made teams think, ‘If we do that, we’ll be in trouble so we have to try to do something else’.

“We’re going to work on that and the moment we improve that, we’ll become even better.”

Arsenal have tightened up defensively under Arteta, helping them to league victories over United and Liverpool last season and wins against Manchester City and Chelsea en route to winning the FA Cup.

But, at the other end, Arteta’s side have only scored three or more goals six times across all competitions since his appointment – and the former Arsenal captain admits creating a more attacking outlook is his next assignment.

“It’s more about our aggression, when we have the ball, our purpose, our aggression, our runs in behind,” he replied when asked how he will go about adding more creativity and freedom.

“When do players take someone on and think, ‘I have to make something happen’? We want them to think about themselves, not him or him, we want them to take accountability.

“They need to want to put the ball in the box more often, because this is what top teams do.

“If the other team want to defend the box, make sure they’re defending the box all the time, and that we’re being very aggressive in the final third.

“It’s something we haven’t faced so much since I arrived here, but I think it’ll happen more and more.”