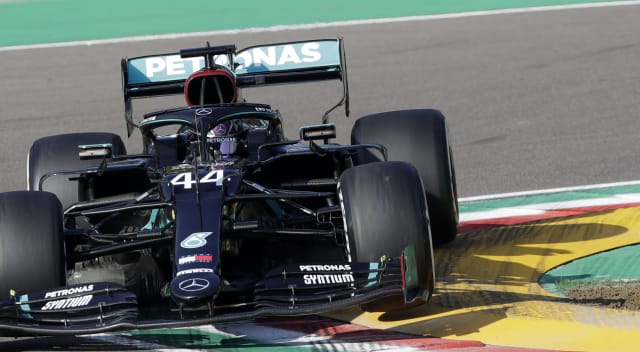 The sport is trialling a two-day weekend here, with Saturday morning’s 90-minute session the sole running before qualifying.

Hamilton, who holds a 77-point lead over Bottas in his inevitable march towards a record-equalling seventh world title, is competing at Imola – a track synonymous with the death of his childhood hero Ayrton Senna – for the first time in his F1 career.

And the Englishman, 35, impressed at the sun-drenched venue in northern Italy by setting the early pace.

Hamilton moved clear of Michael Schumacher as the most victorious driver in F1 history with his 92nd win last weekend in Portugal, and another triumph here will pave the way for him to see out the championship at the next race in Turkey on November 15.

Verstappen, the only driver who has been anywhere near the Mercedes cars this season, will be there to keep Hamilton on his toes.

But it is the sport’s all-conquering team who will start qualifying later on Saturday as the favourites to seal their 13th pole from as many rounds in 2020.

Mercedes will also secure their seventh-consecutive constructors’ triumph on Sunday providing they outscore Red Bull – a feat they have achieved at every race since the Spanish Grand Prix four years ago.

Elsewhere, Pierre Gasly finished fourth in the week he extended his stay with AlphaTauri for 2021, one spot ahead of Charles Leclerc.

In Ferrari’s third home round of the season, Leclerc’s team-mate Sebastian Vettel finished only 12th, half-a-second slower than his team-mate.