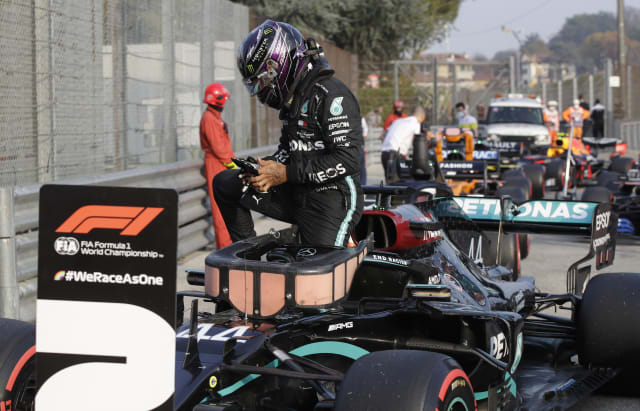 Lewis Hamilton described his performance in qualifying for Sunday’s Emilia Romagna Grand Prix as “p***-poor” after he was beaten to pole position by Valtteri Bottas.

On Formula One’s return to Imola, the track which claimed Ayrton Senna’s life 26 years ago, Hamilton trailed his Mercedes team-mate by 0.097 seconds.

The six-time world champion then expressed his fears that Sunday’s race could be a tedious affair with limited overtaking opportunities.

“Valtteri did a great job, but it was a p***-poor lap from myself,” said Hamilton, who heads into Sunday’s race 77 points clear of Bottas with just five rounds remaining.

“What is unfortunate with this track is that while it is beautiful to drive, I am pretty certain you will see a boring race. Once you get into Turn 2, it is a train from there because there is no place to overtake.

“Valtteri and I are within half-a-tenth of each other, so to have an opportunity to get past I need to gain two seconds on him. It is like Monaco in terms of the importance of qualifying but I hope I am wrong. I will give it everything I have got.”

A week after he moved clear of Michael Schumacher with his 92nd career win in Portugal, Hamilton will head into Sunday’s round knowing that another triumph here will pave the way for him to clinch his record-equalling seventh title in Turkey on November 15.

Bottas’ fourth pole this season ensured Hamilton will not have it his own way, but the Finn has largely been unable to keep pace with his team-mate over a race distance.

Indeed, at the previous round in Portimao, Hamilton finished the best part of half-a-minute clear of Bottas. Bottas has won on just two occasions this year compared to Hamilton’s nine.

But Hamilton said: “I don’t really think I need to say much about Valtteri’s performances. He just got pole position, and I have more poles than anyone here, so it is not like I am a slow-coach.

“He is doing an amazing job and his results speak for themselves. I don’t think there are many drivers who can do what he is doing so I have got a huge amount of respect for him.”

This marked Mercedes’ 13th pole in as many rounds of a crushing campaign and they will secure their seventh constructors’ championship on Sunday providing Red Bull do not outscore them by 35 points.

The last time Red Bull managed to do that was in 2016 when Hamilton and former team-mate Nico Rosberg took each other out on the opening lap of the Spanish Grand Prix.

Verstappen was in danger of being knocked out in Q2 following a spark plug failure. But his Red Bull crew rectified the problem and Verstappen required just one flying lap to haul his car into the final phase of qualifying before slotting into his customary position behind the Mercedes drivers, albeit half-a-second down.

Pierre Gasly celebrated his contract renewal with AlphaTauri to finish fourth, one place ahead of Renault’s Daniel Ricciardo and Red Bull’s Alexander Albon.

Charles Leclerc took seventh for Ferrari at the Italian team’s third home round of this Covid-disturbed campaign.

George Russell’s future has been in some doubt following speculation that Williams’ new owners would replace the young Briton with a driver who brings significant cash to the team.

But ahead of this weekend’s race, Williams put to bed those rumours by rubber-stamping Russell’s seat for 2021, and the impressive Englishman delivered once again over one lap to finish 13th and extend his unbeaten qualifying run against his team-mates to 34 rounds.

Four-time world champion Sebastian Vettel starts one spot behind Russell in a miserable 14th for Ferrari.